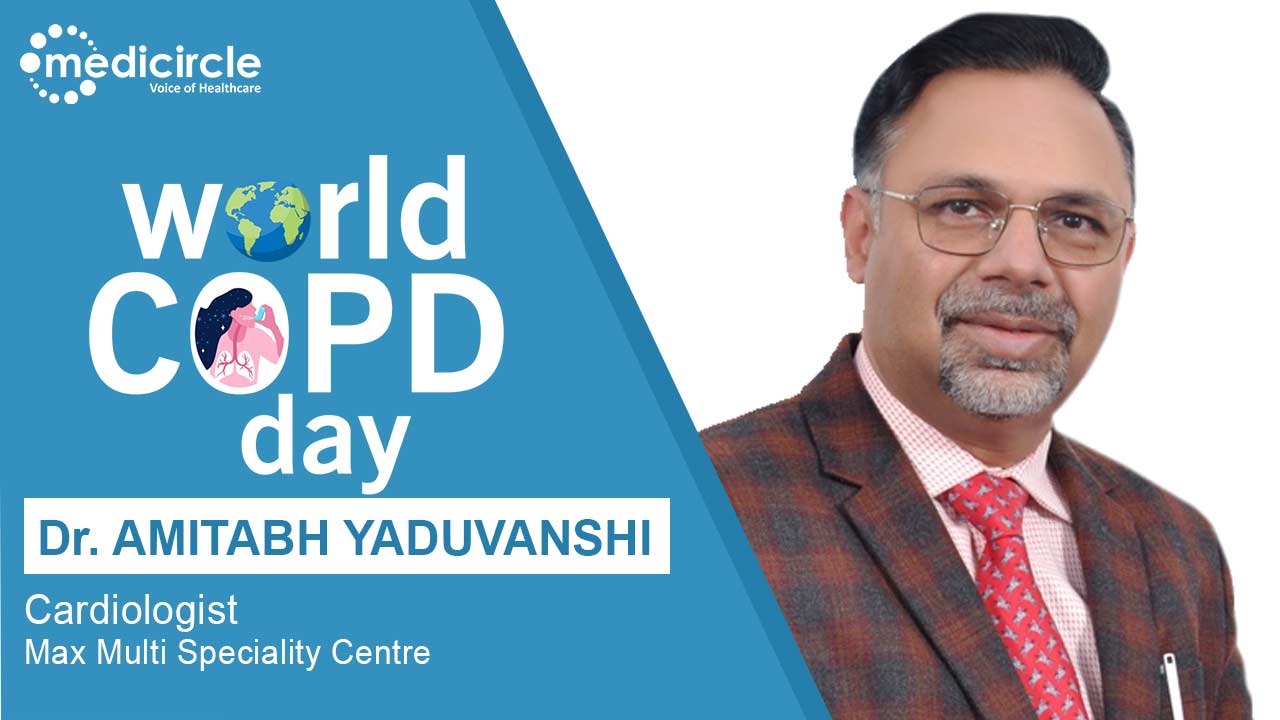 In 2016, COPD caused 13% of all deaths in India. Learn the right way to prevent developing this lung disease by a cardiologist.

Chronic obstructive pulmonary disease (COPD) is a common lung disease. Having COPD makes it hard to breathe. Smoking is the main cause of COPD. The more a person smokes, the more likely that person will develop COPD. India has now the ‘COPD Capital of the World’. Chronic Obstructive Pulmonary Disease (COPD) is the third leading cause of death worldwide, causing 3.23 million deaths in 2019. World COPD Day 2021 is observed on Wednesday 17 November. India contributes a significant and growing percentage of COPD mortality which is estimated to be amongst the highest in the world.

Estimates suggest there are 30 million COPD patients in India. COPD was the second-highest cause of death in India after heart disease in 2017, killing 1 million. COPD led to 13% of all deaths in India, and 7.5 million were at risk of the disease in 2016. We at Medicircle are conducting the World COPD Day Awareness Series to raise awareness, share knowledge, and discuss ways to reduce the burden of COPD worldwide.

Dr. Amitabh Yaduvanshi is the head of Invasive cardiology and electrophysiology at PSRI Hospital, New Delhi. He was earlier associated with Holy Family Hospital, Saket City Hospital, and Max Super Speciality Hospital. He has more than 20 years of experience in interventional cardiology and electrophysiology with more than 7500 angioplasties, 5000 EP procedures as well as 1000 pacemakers & AICD / CRTD device implantation. He is a part of the record-breaking team for doing the maximum number of Balloon Mitral Valvuloplasty in a single day. He has done more than 30 publications in high-impact National And International Journals.

“With COPD, one’s airway becomes thinner and one needs to forcibly breathe out. This makes breathing difficult for them. This causes 2 damages. One is that our oxygen level decreases and another more dangerous thing are the rises in our carbon dioxide levels.”

“Since COPD is a chronic disease, people get used to low level of oxygen. But a high level of carbon dioxide is alarming. Increased carbon dioxide can make the person unconscious. It can also cause a state of confusion in the patient.”

He explains, “The first signs of COPD are breathlessness. With the weather change, breathlessness would be more common. Here breathing in is easier than breathing out. If a COPD patient is breathing in, there’s a wheezing sound. ”

“It is mainly caused by smoking. Other factors include tuberculosis, other lung infections, and occupational exposure to dust. Without masks, people involved in welding, construction, and other occupations are at a higher risk of developing COPD.”

“In the more advanced stage of COPD, there is more pressure on the heart and liver. Your muscles can weaken and swell in the foot is observed.”

He mentions, “With COPD prevention is the best strategy. Once COPD is developed it reaches a stage where it becomes irreversible. By definition COPD is non-reversible. To prevent developing COPD, one needs to quit smoking. Masks should be a must if your occupation exposes you to dust. Pollution is another reason.”

“Take the necessary precaution of wearing a mask. Use air purifiers if your city is prone to having smog. Clear the dust from around your house by using a wet cloth or by sprinkling water. If one is suffering from diseases like tuberculosis then don’t quit the treatment midway.”

COPD and the Heart

“Our lungs are like a sponge. With more air, the lungs are more spongy in nature. In COPD patients, there is less air in the lungs making them harder. This causes resistance in the blood flow as it goes from our lungs. Because of more resistance, the right side of the heart has to work more forcibly. This is called pulmonary artery hypertension.”

“COPD is the primary cause of Cor Pulmonale (Right-sided heart failure). The patient is not suffering from any heart problems. But the problem in the lungs is causing more pressure on the heart. The heart will eventually malfunction.”

He mentions, “COVID-19 is primarily a lung disease. But it can cause blood clots in the lungs and other parts of the body. Clotting can cause heart attack and bleeding in the brain. Initially, there was fear that COPD patients, who already suffer lung damage, will get more affected by COVID-19. Fortunately, there is no extra damage to COPD patients due to Covid.”

“This paradoxical effect is caused by multiple factors. Firstly, COPD patients were already vigilant because of their condition, making them safer. Lastly, some medicines prescribed to COPD patients might have protected them from harm.”

Dr. Yaduvanshi recommends the following care for every COPD patient.

Use inhaler in the correct way