Diabetes and its Complications - Medicircle 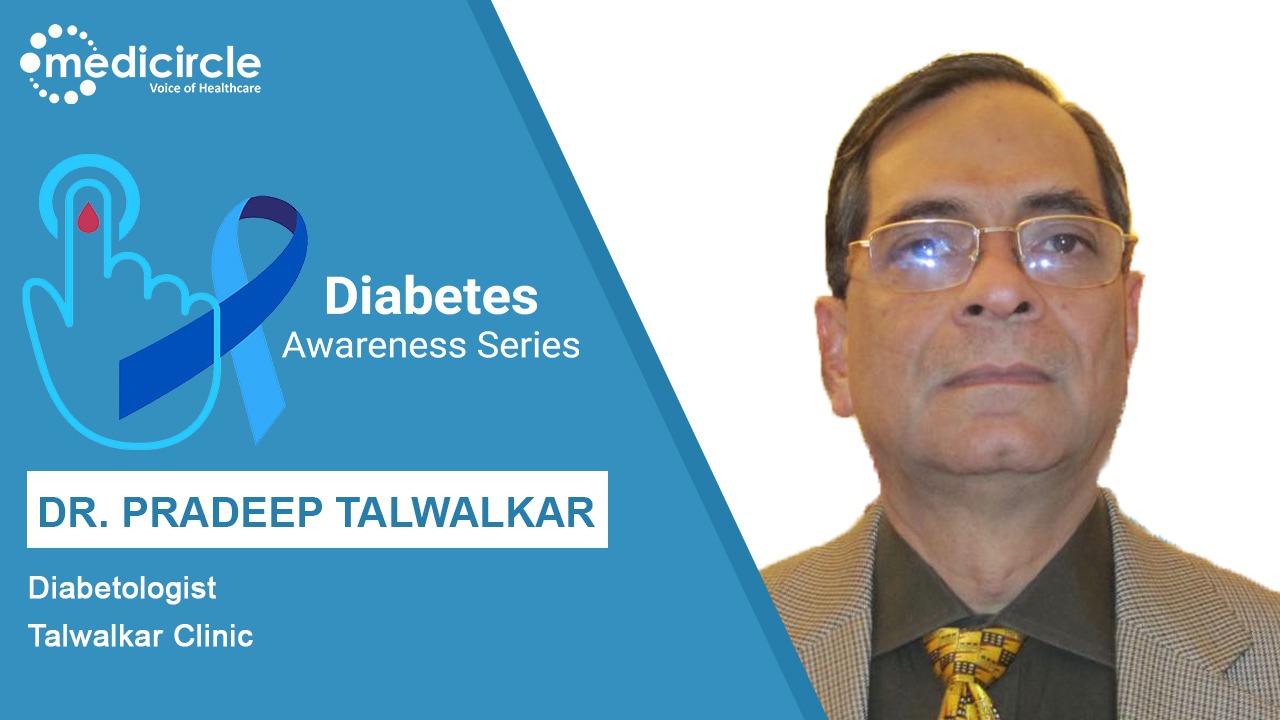 Industrialization, Cocacolisation and Urbanisation have ruined Civilisation but it has also given us more cases of diabetes. Learn more about this disease and the ways in which one can battle it.

Dr Pradeep Talwalkar has been practising Diabetology for Three Decades now. He has completed his MBBS and M D from Grant Medical College, Mumbai in 1973 and 1976. He is practising at Talwalkar Diabetes Clinic - Dadar West. He has lectured extensively all over India. He has Attended Numerous International Conferences on Diabetes and Visited Several Centers of Excellence in the Field. He actively participates in all conferences of the International Diabetes Federation.

Dr. Talwalkar begins, “There is a difference between these two. Diabetes is a disease and the cause of rising in blood sugar. The kind of sugar that rises in diabetes is glucose. There are many other kinds of sugar but 99% of sugar in the body is glucose. Diabetes is the affection of various organs like the pancreas, which results in less insulin secretion or less effect of insulin.”

“For proper diagnosis, you must have a post-meal blood sugar of more than 200 or the fasting glucose of more than 126. It is not necessary to have both those qualifications. So diabetes is the disease and the rise in blood sugar is the result of that disease.”

Dr. Talwalkar says, “To an extent, thyroid and diabetes are related to each other. Yet the exact mechanism with which they are interrelated is not known. Thyroid disorders are more common in diabetes and diabetes is more common in people with a thyroid disorder. By the research done in Western countries, globally 5% of the population has hypothyroidism. This is caused by the low function and low hormone levels of the thyroid gland. The disease caused by the excessive function of the thyroid gland is called hyperthyroidism.”

“Both hypothyroidism and hyperthyroidism are closely associated with diabetes, as the chance of the 2 thyroids is more likely in a diabetic patient. In our country, one paper states that 1 in 10 people will have hypothyroidism. These are mild cases and many wouldn’t even know if they are having it. So 10% of the population has the prevalence of hypothyroidism.”

Dr. Talwalkar explains, “The most common types of diabetes are type 2, simple diabetes that is present in 96% of the population and type 1 diabetes which affects 2% of Indians. Type 1 is a rare disease but its association with thyroid disorders is much stronger. This is because type 1 diabetes is an autoimmune disorder and so is hypothyroidism. Here, the body’s defense cells get confused with the body’s own thyroid cells and the beta cells present in the pancreas as foreign elements. This makes them think that these elements are invaders here to harm the body and hence they destroy them.”

Dr. Talwalkar mentions, “Diabetes is a lifestyle disorder. Type 2 diabetes, the most prevalent, is classified as a lifestyle disorder along with blood pressure, obesity, heart disease and high cholesterol. All these diseases are caused by the wrong way in which we eat and live. Life is filled with no exercise. An Australian scientist has said that Industrialization, Cocacolisation and Urbanisation have ruined Civilisation. Rural people migrating to cities, the increase in nuclear families, increased stress and tension and consumption of wrong foods like ready-to-eat foods, high in calories junk food and coca colas.”

“We no longer climb and instead use the elevators. We now have vacuum cleaners and automobiles and no physical exercise which leads to diabetes. These types of diseases once set in don’t have any cure. You cannot cure diabetes. If you even come across an advertisement that says they can cure diabetes, then it is an offense as one can go to jail for that claim. So what advertisers do is not classify their product as medicine or drug. Their license is that of food products like biscuits and cakes. Only by classifying their product into the food category can they make such claims.”

“There are some exceptions. If you are a young person with a weight of 110 KGs and are experiencing blood sugar, then it is due to a faulty lifestyle. But if you shed 20 KGs or go through surgery to shed weight, then till the reduced weight is maintained diabetes will be at bay. This is not a cure but other words can be used to explain this.”

“The major arteries going for the brain get affected. With the decrease in the internal diameter of the blood vessels, there is an increase in the chances of stroke and vascular brain disorder. This too is 4 times more likely in diabetic patients. The major blood vessels going to the lower limbs are also get affected by diabetes. If feet and lower limbs are affected and untreated, then coupled with blood pressure and high cholesterol, results in Gangrene. It starts with the gangrene of the toe and spreads to other toes, and later spreads upwards. Some people lose only one toe but ultimately they can lose other toes.”

“But if you have affection in the smaller microscopic blood vessels those that lead to the eyes, the kidneys and nerves,  then one can get disorders of the eyes, kidneys and nerves. If an eye infection goes unchecked then it can result in blindness. In a few not very poor countries where vitamin A deficiency is not corrected, the commonest cause of blindness is diabetes.”

“In any high, medium or low-income country, the commonest cause of kidney failure and subsequent requirement of dialysis or kidney transplantation is diabetes. Over 50% of the people undergoing dialysis in our country are diabetic. Diabetes is the principal cause of kidney failure. Even those who feel a tingling sensation which then transforms into a lack of sensation and gangrene are diabetic in nature. It is also the prime cause of peripheral neuropathy, blindness, urinary infections, fungal infections and gall bladder infections. Obesity and tuberculosis are common problems in diabetic patients.”

“It is also seen that if a diabetic gets COVID-19, then it is more likely to turn out to be severe. The patient is more likely to get hospitalised, more likely to get on a ventilator and more likely to die due to COVID-19 infection. That is why diabetes has to be controlled day-in-day-out. Diabetes is a Silent Disease, as it doesn’t show any symptoms for a long while. High blood sugar acts silent but over a period of time, they start affecting organs. A patient gets to know when the symptoms of the organs start showing and then they realised that it is caused by diabetes.”

“If someone gets a heart attack, the cardiologist will always check the blood sugar as part of the investigation. It is then realised that diabetes was indirectly the cause of heart attack. The same goes with swelling of the feet, high blood pressure, nausea, vomiting, low appetite and renal failure. They are all caused by diabetes.”

“In our country, once you cross age 30, no matter how fit you are, you must get it checked. Every 2 years you must repeat the test. once you realise you have diabetes don’t rely on the lack of symptoms. Periodically get the test done once every 3 months. To see whether you are on the right track with the right drugs. This will also help you to figure out whether you need additional dietary inputs or exercise.”

“Unfortunately diabetes is a disease that is progressive. This means that as time goes away, the internal severity of the disorder keeps on increasing. So you have to keep pace with diabetes and control it despite its progression. This can be done by taking more and more drugs and ultimately insulin. Then it progresses to taking insulin 3 times a day. Here what worked yesterday wouldn’t work today. The same goes for every person. What treats one person will not necessarily be the solution for another person. The best treatment is the one the doctor gives by analysing your conditions. This will give you a better quality of life along with longevity.”

Dr Talwalkar advises, “Nowadays, people don’t want a longer life. They just want a better quality of life. So it is important to tightly control blood glucose. Diabetic patients should remember ABC. A better way to measure diabetes is glycosylated haemoglobin (HbA1c). Here the A should be lesser than 7 and in very young people it should be lesser than 6.5. The ‘b’ stands for blood pressure. Blood pressure should always be less than 130/80. Here, ‘c’ stands for cholesterol. The most important component here is LDL cholesterol. Cholesterol should be less than 100 if you don’t have any heart complications. But with heart complications, the LDL should be less than 70.”