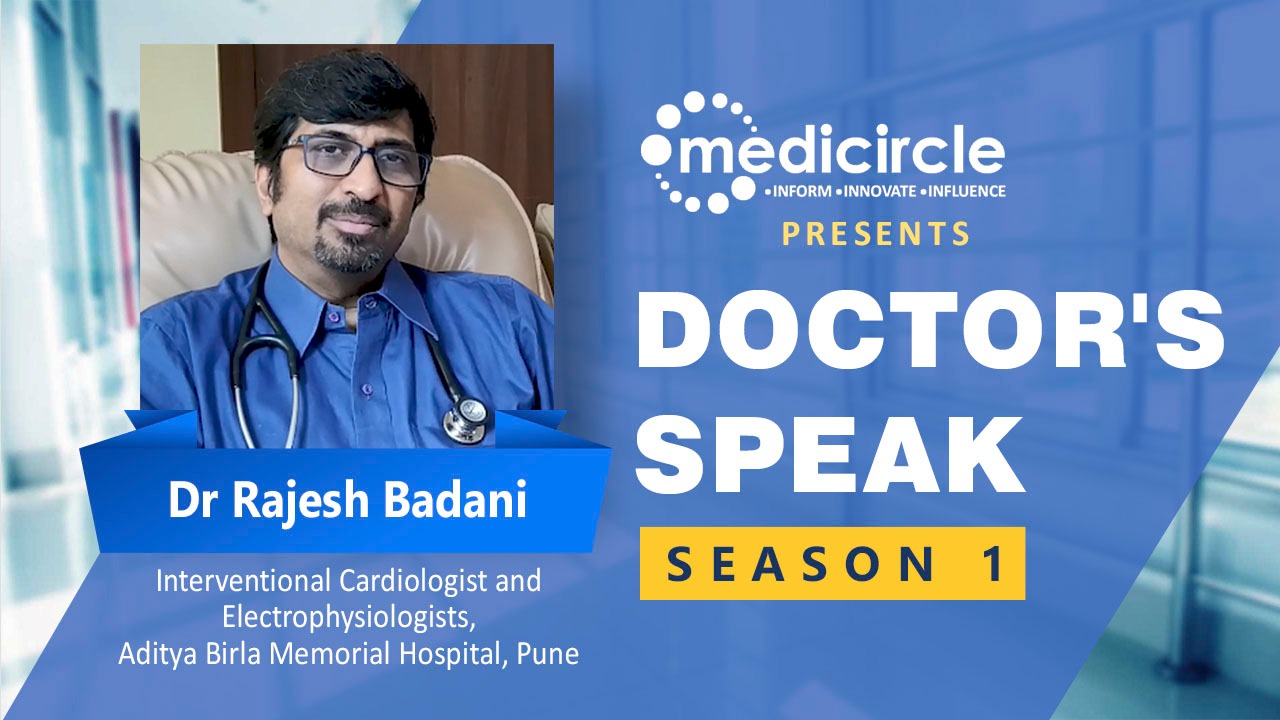 Cardiovascular Diseases tops the list of 10 KILLER DISEASES IN INDIA. This amounts to about 24.8% of deaths in the country. Although preventable, the disease is killing more people each year. Let us know what are its main causes and Prevention Methods Which is better Stent or Bypass and Is it hereditary. Dr. Rajesh Badani, Interventional Cardiologist and Electrophysiologist, Aditya Birla Memorial Hospital, Pune talks to Medicircle on Doctor’s Day answering the FAQ’s from our readers.

What are the classic symptoms of a heart attack

''Technically there is no terminology like classical symptoms because as the disease evolves over a period of time, symptoms also become more and more variable,'' says Dr. Rajesh. The commonest symptom is a heaviness in the left side of the chest, but in today's era even right side of the chest, if somebody gets discomfort, pain in the upper arm or the forearm, pain at the tips of the shoulders, pain at the back, pain in the jaw while walking, and most importantly feeling of gastritis or burning sensation in the lower side of the chest can almost occur in 9 out of 10 patients coming to the hospital with a heart attack.

What should a person do in case of heart attack
So whenever a person has suspicion or the doctor has a suspicion that this person is suffering from a heart attack, the first thing that needs to be done is take an early transport and reach a tertiary care hospital where the facilities for an Angiography, Angioplasty and Critical Care are available. The medicine that the doctor can give is 325 milligrams of Disprin a chewable tablet that needs to be chewed on, another tablet is called Clopidogrel, six or eight tablets can be taken, and Atorvastatin 80 milligrams. One caution is important that sublingual, Sorbitrate, or nitrate in today's era, we generally avoid giving them because that can decrease the blood pressure and people can have catastrophic events.

What Dietary changes can one make to reduce the risks of Heart Disease?
Diet forms, a major non-pharmacological form to reduce the incidence of cardiovascular disease. In our country, there are various customs particularly north, south. east and west but the commonest thing that we need to do is, please reduce the total amount of calories that we take in our body throughout the day, that is, reduce the incidence of simple carbohydrates like rice as well as chapati and increase the intake of fresh green leafy vegetable fruits as well as dal and other proteins which are there particularly vegetarian and in non-veg egg yellow as well as cheese has got pretty good fat content, avoid meat and reduce the incidence of chicken, and that would probably take care of your cholesterol abnormality and the chances of developing sugar and blood pressure also decrease drastically.

Is Heart Disease hereditary
About Heart disease, it can be said, generally and very rarely; less than five percent of individuals who have heart problems can be because of family history. So, that is why it is very important in the early days to understand if any of your family members; maternal or paternal side has got a history of a heart attack.

What is Coronary Angiography and how safe is it?
Coronary angiography is a method to identify the blockage in the heart arteries. It can be done by two ways one is a non-invasive method, which is called CT coronary Angiography, exactly the way a CT scan is being done and the procedure takes almost 15 to 20 minutes and the second, the gold standard is the Invasive Coronary Angiogram in which there is a small catheter which is placed into the right side of the hand or through the leg. It can be done through two routes. And that is the gold standard to confirm whether the person has blockages, the percentage of blockages, the flow into the coronary arteries, and the calcium that the person is harboring in the coronary arteries. It is a relatively simple procedure. The procedure time is just two to three minutes. It is done as a daycare procedure and the patient can be discharged before evening. Also, it is extremely safe and the complication rate is one in less than one in a lakh patient.

Is stent better than bypass?
So this is an eternal dilemma or a controversy that has been occurring from the mid-90s when the stents came into vogue. Angioplasty and Bypass are two forms of therapy to treat coronary artery disease, as you know, if a road is being affected and the road is bad, either you put cement over it and clear the block over the road or you create a new road from the beginning of the problem to the end of the problem and bypass that abnormal bad road and create a new road. So the first procedure is an Angioplasty where I rectify the root cause where the problem is, by putting in a stent and Bypass surgery is generally done by open heart surgery and you put a new graft to the patient's arteries.

Generally, the pros and cons of every procedure need to be talked about. So, if the patient is young, the patient is a non-diabetic, patient's heart pumping capacity is lesser and the patient is a non-tobacco smoker or a non-tobacco-chewer generally Angioplasty is preferable to Bypass surgery. In a patient who has multiple blocks, more than four or five, and who is going to require more number of stents is diabetic. doesn't have a healthy lifestyle, probably in those situations, bypass may fair better than an Angioplasty, but in today's era with the kind of new stent technologies coming in, majority of the patients other than left main disease are generally the best for angioplasty and the success rate of this procedure is close to above 95%