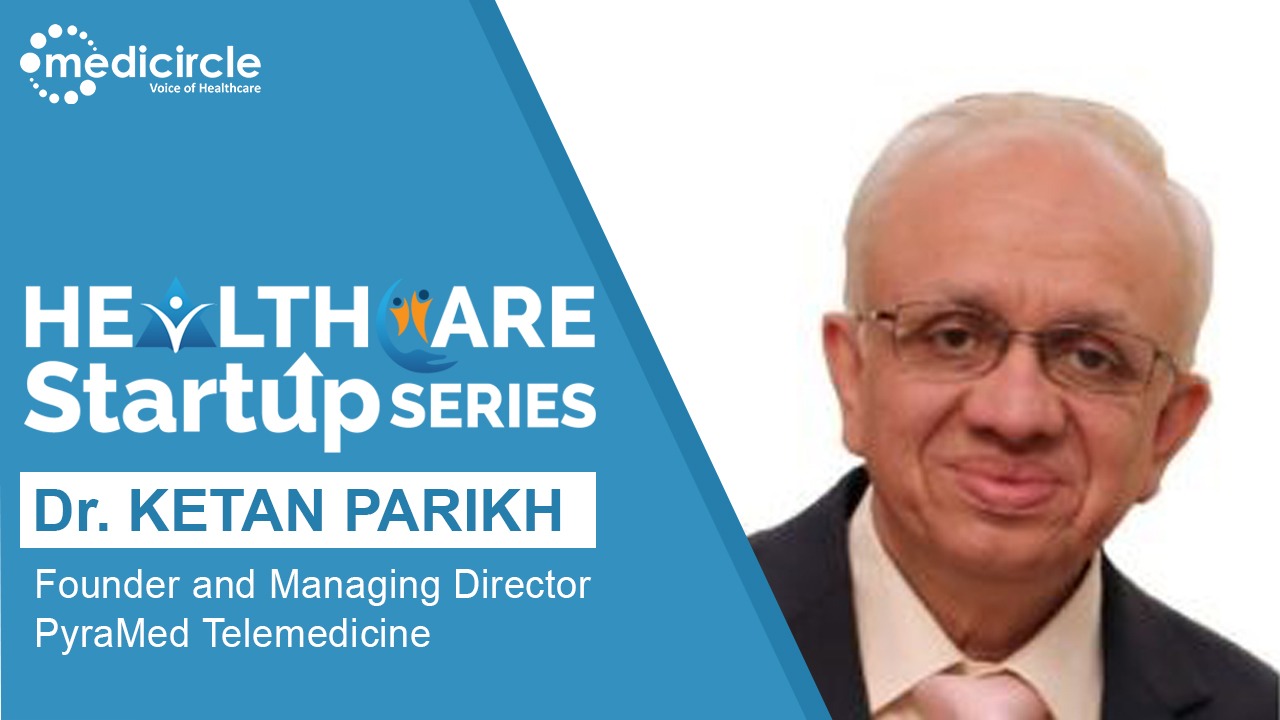 In recent years healthcare has become an integral part of the business ecosystem in India. To stand apart in the race, startups today need a more customized approach and targeted promotion to have an impact on their audience. While healthcare itself is a noble profession and majorly contributes to humanity, successful healthcare Startups are making a valuable contribution to the national economies around the world, their stories as influential role models on a groundbreaking journey are inspiring many young aspirants. We at Medicircle are conducting the Top Healthcare Startups Series to showcase the change-makers of the healthcare industry.

Dr. Ketan Parikh is the Founder and Managing Director at PyraMed Telemedicine, Mumbai. He is also an Urologist & Laparoscopist. PyraMed Telemedicine is a unique platform that emulates the concept of Pyramidal health care. It respects the relevance of and maintains the involvement of the primary doctor in the health of any patient besides empowering him with case-based knowledge and protecting him medico-legally. He has been featured as one of Mumbai’s TOP DOCS through an independent survey by ‘India Today’ in 2010, 2011, 2012, 2013 & 2016. He has been Recipient of the V K Raina Memorial Medal in August 2016

The ideal model of healthcare

The pyramid model of healthcare is the basic (ideal) model of healthcare. It was being practiced even in India for years ago. Most advanced countries practice this model. The earlier family doctor used to look after common problems of a family or a patient and if the doctor encountered any major issues, he refers you to the specialist. So, suppose there is a problem that could be affecting the liver as well as the lung. The liver specialist will give his opinion, the lung specialist will give his opinion but it is the primary doctor who has to integrate all information and process further. This was the pyramid model of healthcare. But in current time, the system of pyramed has got violated drastically.

“It is only in the last about three decades and that too in the metro cities of the country, where this model has been sort of bypassed or you may say is not being followed and more and more patients tend to go directly to specialists. This is resulting in a negative impact. The person who was integrating health with the past and present, is getting bypassed which is not good for health care,” says Dr. Ketan.

Only in healthcare, the pyramidal system is not being followed, rest everywhere there is a hierarchy. Advanced countries are very much strict regarding pyramid models. You can't go directly to a specialist. You have to get a reference from your family doctor. Telemedicine exaggerated the problem to the next level.

The emergence of PyraMed Telemedicine

So, this led to the birth of PyraMed Telemedicine where we can emulate the right pyramid of healthcare. PyraMed’s philosophy is based on three key core values.

Empower the Doctor - Empower the primary doctor by helping them to digitally access specialists’ clinical advice and gather case-based learning while being a pivot of their patient’s health and healthcare data.

Enhance Patient safety - Enable the patient to digitally acquire specialized medical advice without compromising on clinical findings, without the travails of traveling for it.

Enrich the Experience - Enrich the healthcare delivery experience by making it affordable, accessible, accountable, and accurate.

When asked about the working procedure of the model, Dr. Ketan explains, "The patient goes to the primary doctor. This doctor refers him to a specialist. The case is being discussed between the specialist and the primary doctor. So, he also learns. This is what we call case-based learning. He continues to learn, he treats the patient, the travel and the inconvenience of going to a hospital, the possibility of getting exposed to the hospital around surroundings unnecessarily is diminished for the patient. So, it benefits the patient. The primary doctor remains in charge of the patient’s health.”

Talking about the benefits of the Pyramid model Dr. Ketan says, “It is a B2B model, that means it's only between a doctor to a doctor. We have a very robust panel of specialists which is available. Consultants find it much more useful. Here the primary doctor can do the physical examination and convey the findings to the consultant which gives 90% accuracy whereas in B2C telemedicine it's only 60% accuracy."

Dr. Ketan’s platform is very new as of now, they just completed their pilot project, which was between pediatricians and pediatrics specialists of limited states. They had about 15 Pediatric Specialties in their pilot project. And now they have about 40 Specialties with them and are increasing gradually. They are also working on other different specialties for general practitioners.  This platform is unique, there were no models to follow. So, they had to make all new systems. And only this month, they are starting with family doctors or general practitioners. So, it's too early for them to talk about results or achievements.  Patients need little awareness of this model.

When asked for funds, Dr. Ketan informs, “We have not gone for funding yet, we are bootstrapped.”

“I think as far as pediatric surgery is concerned, we have done very well. We are not even about five years behind the rest of the world (the most advanced centers). Now, there are centers in India where they have started doing fetal surgery. Newborn children surgery, we have been doing for a long time. The problem here is that children are not covered by insurance, mostly newborns. And because they are not covered by health insurance, the parents have a limited amount of money that they can spend. And that is a very big deterrent because a lot of expense goes for surgery of a newborn child,” mentions Pediatric Specialist.

While sharing the journey of becoming an entrepreneur from a doctor, Dr. Ketan expresses, "As a professional, we deal with individuals and as a health entrepreneur we are doing the same healthcare which we have been trained to do, but to a very large number of patients. Not directly but via this thing, we can organize the healthcare for a large number of patients. So, it just broadens the canvas massively. And that is very satisfying.”