How can you take care of an ADHD-affected child? 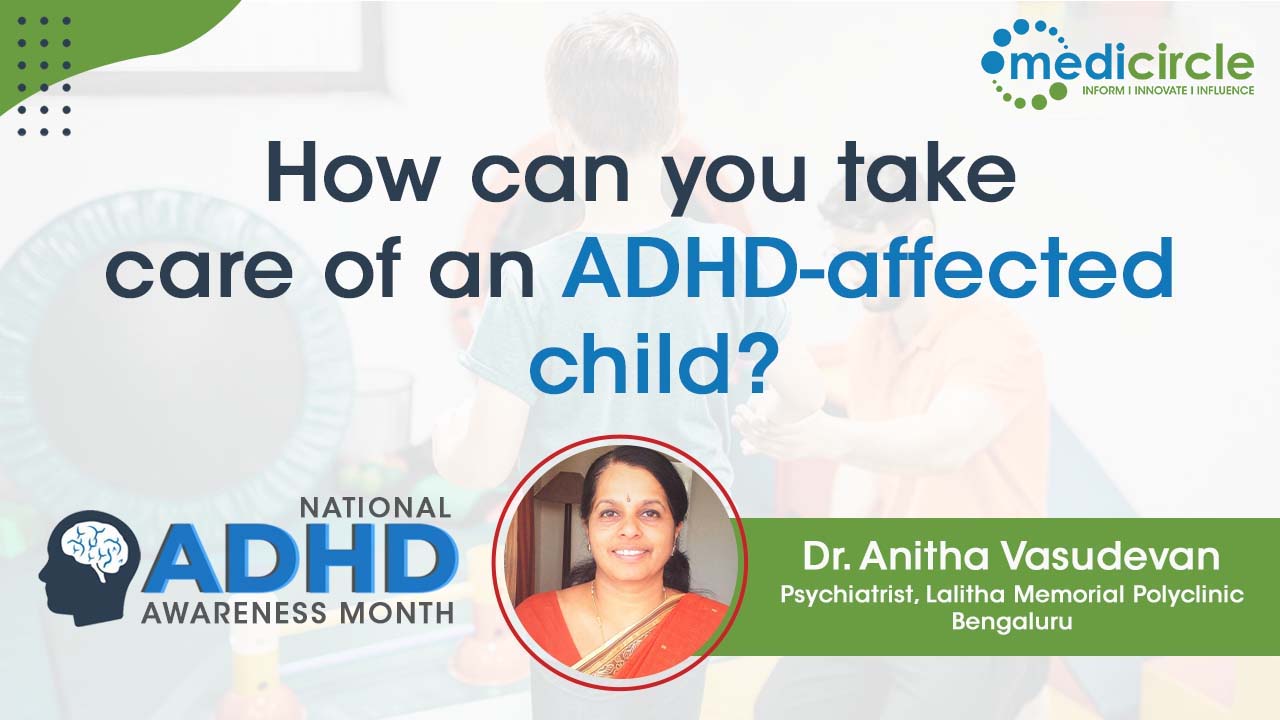 ADHD is a neurodevelopmental disorder found in childhood and lasts into adulthood. A child with ADHD may be hyperactive, have trouble paying attention or be unable to control impulsiveness.

Dr. Anitha Vasudevan is a renowned Psychiatrist in Bengaluru and currently practicing at Lalitha Memorial Polyclinic, Bengaluru. For the past 32 years, she has worked as a Psychiatrist.

ADHD studies conducted in different parts of India suggested a prevalence between 2% to as high as 17%. In numbers, an article published in India mentioned that it is estimated that 10 million Indian children are diagnosed with ADHD annually.

What is ADHD and what are the signs and symptoms for it?

Parents are more aware of ADHD nowadays. If we go back to school days, we have much more free time. We were not confined to a classroom, like when I was a kid, we had much more open classrooms and after class, we could go and play for some time, come back and join the class. But it is not the same nowadays. Now huge numbers of students are confined to one classroom, with a strict curriculum and more demand from children. Maybe because of all these, we identified the disorder more.

It can’t be that ADHD was not there before, but the identification and awareness among parents and teachers is definitely more these days. That is the reason for more prevalence nowadays.

ADHD means Attention Deficit Hyperactivity Disorder, which is a neurodevelopmental disorder. Dr. Anitha Vasudevan states that “children are born with a wiring problem in the brain called ADHD. ADHD-affected kids show a lot of behavioral symptoms. Parents are often blamed or they tend to believe that there could be some problem with parenting that is leading to ADHD. But I reiterate the fact that it is not so that children are born with ADHD. Of course, parenting issues and environmental factors can modify the course of the illness”.

When we talk about symptoms related to ADHD illness, there are three domains.

Children are normally more hyperactive than us. They can’t sit in one place. Often this is not considered as hyperactivity. When it is more than normal, we call it abnormal hyperactivity.

Hyperactivity manifests as complaints from teachers because parents think that it is normal, but when a teacher has to manage 30-40 students in the class, they can definitely see the difference.

When it comes to hyperactivity, kids find it difficult to sit still. They are always on the go. Children have energy levels as if the motor is ON. They constantly roam around the class, over-talkative, answering questions that are not meant for them.

They are unable to control their impulses. When taken outdoors, they tend to cross the road without checking vehicles. They want to explore other people's houses, though we don't want them to take others' toys. They may break cutleries when taken to hotels and we may end up paying money.

Because of their hyperactivity and impulsiveness, they may encounter many accidents.

The child is definitely attentive, but in sustaining the attention for a longer time, we call concentration or focus, these children fail to perform. One-word answers they write, but they find it difficult to organize an answer. Teachers complain that their answer sheets or notebooks are not complete. They fail to pay attention to smaller details. They often miss out on various things in the notebook. Losing things is another complaint. Children forget to bring water bottles, pencils and tiffin boxes back home. Once they return, they throw things out and the room is a mess. Other common complaints are forgetfulness or inattention.

Children are distracted and look out of the window without paying attention during class. These are the common symptoms parents report to us. Apart from these problems, these children have some good qualities. We often ask parents, do you want a child who sits still or is active and colorful? It is a desirable quality to some extent. When people come home, these children are very friendly and have conversations with the people and are very affectionate children. These are some good qualities, but when they exceed a certain limit, they do suffer.

What are the root causes?

The root causes are unknown, but we can talk about certain risk factors which can possibly lead to ADHD. Definitely, ADHD runs in the family. In most families, one of the siblings or parents also suffer from ADHD, which is a genetic factor. Second, we do see a lot of ADHD problems in children whose brain is damaged.

Children with intellectual difficulty or some brain disorders like autism, we do see a lot of ADHD symptoms. Some environmental factors we talk about, such as toxins, for example, lead toxicity, alcohol consumption or smoking in mothers, are potential risk factors for ADHD.

Is ADHD by birth or does it develop gradually?

Does a child having ADHD face mood swings?

Another problem we see in children with ADHD is mood swings. They are either excited or disruptive. All this can be because of the pressure from parents and teachers. Obviously, when the child is forced to write, which he/she doesn’t want to do. So it can lead to anxiety. Anxiety can manifest as anger outbursts. So they can lose their temper easily. If any snack or ice cream is brought and asks them to have it after food, children with ADHD can’t control their impulses and they want to have it immediately. All this can lead to a lot of trouble between children and parents or teachers.

How to prevent ADHD?

Just hyperactivity doesn’t mean ADHD. It has to be seen in the home and school environment. When the working parents reach home, children are naturally excited to meet them and are hyperactive. This we cannot call ADHD. It has to be present in the school environment as well. For the diagnostics, we need to talk to parents and teachers about how the child behaves in the class. Then only we come to a conclusion. Most of the time, the complaints are from the teachers that, the children are not performing well in academics, they don’t complete the answer sheets, they don’t write the class work properly and neatly.

Teachers are the first ones to be aware and pick the problem, and then the fact is conveyed to parents. Parents should pay attention and they should bring the child to us for diagnostics rather than saying, my child can’t have the problem. Awareness is the most important thing to picking up the disorder.

Dr. Anitha Vasudevan states that “once the child is brought to us, we do an assessment which is a long procedure. Not like we can label the child as having ADHD and start treatment immediately. We do take time to understand the behavior and other aspects of ADHD. In India, not everyone is put on medication for ADHD. We do a lot of psychological work before saying that the child requires medication. The first thing is to be aware of the problem and not think that once we go to the doctor, we start medication for all children. Most of the time, we work with the teacher, parent and counselor and we do a lot of behavioral management and then only go to medication management. Along with medication, a lot of psychological treatment is also done”.

Does ADHD reduce with age?

Hyperactivity symptoms do decrease by the time they reach their teenage years. We see that hyperactivity definitely decreases, but other symptoms can persist. Now we do come across adults with ADHD problems, maybe due to awareness or the kind of work they have to do. That is called ADD, Attention Deficit Disorder.

At what age does ADHD appear?

It definitely appears in childhood. Most of the time, the pickup of the problem is at the age of  7-9 years.

Can adults get ADHD?

ADHD is a childhood disorder that can be carried into adulthood.

Can ADHD be fully treated?

ADHD is a spectrum and all of us will have some symptoms of ADHD. What we are treating is they should be able to function as human beings. ADHD shouldn’t hamper their personal or professional life. When we look at that as criteria, this is definitely a very manageable condition. Some of the symptoms may persist but that will be normal, like impulsiveness. It is not a bad quality. When it hampers day-to-day existence, we have to treat it.

Definitely we have to pick it up early and give proper intervention. If left untreated, it can affect their academic performance. They have a lot of potential and they are normally very intelligent students. In spite of being intelligent, they don’t achieve something because of ADHD. Due to their impulsiveness, they can get into wrong things like gang activity and substance misuse and they are prone to accidents. All these can be prevented if tackled at a young age.