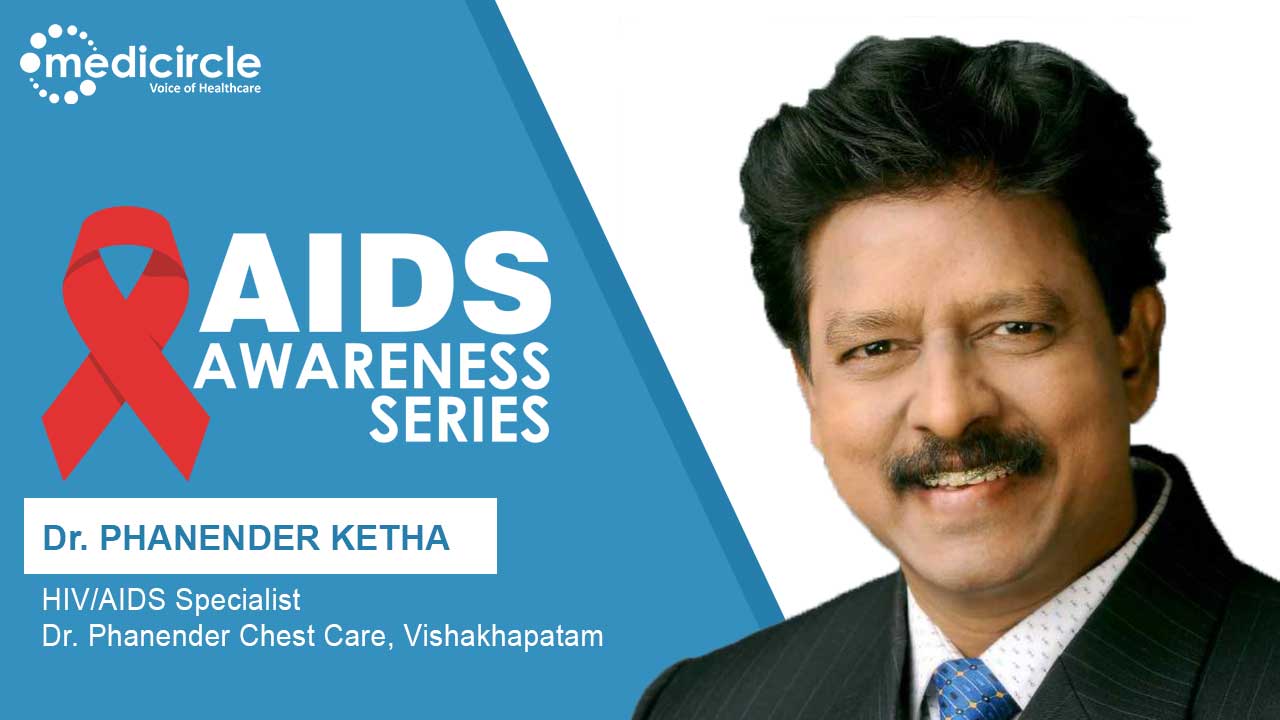 HIV is transmitted via 2 modes - Sex and Blood. Learn about the easy and effective way with which one can avoid HIV Infection. Follow the ABC method and be assured that you will be at no risk of catching AIDS.

Dr Phanender Ketha is an HIV specialist and has experience of more than 25 years. He was awarded an MBBS degree from Andhra Medical College. He has been Awarded by Dr Vyagraswarudu Memorial Gold Medal For The Young Scientist and Award Achiever Of India Gold Medal For His Representation At The International Level.

Dr Ketha begins, “We had a really tough time in 1986 and 2000s. 2 decades ago in 2002, I was the first person to start antiretroviral therapy in Andra Pradesh and second only to a doctor in Delhi. This was possible as the government had not started the ART centres. I was able to do it as I was a Fellow of HIV medicine from CMC Vellore and had a keen interest in this. In 2004, the government initiated ART centres and people started receiving AIDS treatment.”

“HIV is transmitted via 2 modes - Sex and Blood. In the latter, blood transfusion is primarily the cause. A licenced blood bank will never transmit AIDS-infected blood. Nowadays, we have an RT-PCR NAAT test or Nucleic Acid Amplification Test that can detect whether the donor has HIV infection within 4 days. Earlier the problem was that the donor’s blood on the day of screening was negative and after 10 days it would show as positive.”

“One can also receive the virus via needles. Tattoos, piercings etc can cause transmission if the needles are contaminated. When caregivers give infants chewed food, it too can cause the virus to transmit to the child. AIDS can also transfer from the mother to the child if the mother is HIV infected. This transmission can happen anytime - during the pregnancy, child delivery or during breastfeeding.”

“There’s a prevention programme designed by the government where the mother and the child are given treatment. This programme has been effective in reducing HIV transmission in newborns. Here the mothers are screened and then with treatment, the viral load comes down to being undetectable hence untransmittable.”

“During the delivery, to lessen the chance of transmission we have a modification of cesarean section. With this, the baby has no chance of getting an HIV infection. To stop the transmission through breastmilk, we sometimes advise stopping breastmilk or we give the child serum up to 6 weeks that can help stop catching this virus. With these steps, the transmission has reduced by less than 1% This is a success story of the government as now we cannot even hear a boy or girl being born with HIV.”

Difference between HIV and AIDS

Dr Ketha explains, “HIV is an infection found in the blood. Here, there is an intuition period and a window period. In the former, they have contracted the virus and are producing the symptoms. And the latter is since they are producing symptoms to the day they test positive. The window period for HIV and AIDS is 6 months.”

“HIV if undetected and untreated will progress to AIDS. Human immunodeficiency virus (HIV) infection slowly breaks down the body’s immunity. The body's defence mechanism gets low as the number of CD4 cells drops. CD4 cells is nothing but the cluster of differentiation 4. So normally, the CD4 count in the body is around 800-1000. But with the infection, it falls down to 500 and less. When it drops beyond 200, it is called AIDS.”

“AIDS or acquired immune deficiency syndrome is a Syndrome whereas HIV is an Infection. With a low CD4 count, the person is open to many opportunistic infections. For instance, the fungus usually doesn’t infect the mouth but with low immunity, it will take the opportunity to infect the mouth. Also when one’s CD4 count is less than 500, they will experience recurrent infections. So such patients with CD4 count less than 500 can get pneumonia, tuberculosis and other diseases.”

“When the CD4 count drops below 200, then the person has AIDS and is vulnerable to more fungus and infection. They are also vulnerable to pneumonitis pneumonia. This is a rare type of pneumonia observed only in cancer patients and organ transplant people where they are immunocompromised. When the CD4 count drops below 50, then one can have tumours in the brain called lymphoma in the brain. Such patients will also experience the spread of fungus in all parts of the body. This is called a disseminated fungus. When one is at this stage, then the difficulty to deal with these problems is very difficult.”

Dr Ketha adds, “We now have more than 30 types of treatments available within antiretroviral therapy (ART). ART is the cure for HIV. This cure is a functional cure. It cannot eradicate HIV but make the virus dormant inside the person. Apart from 2-3 people, no HIV positive person has become an HIV negative person. HIV is now a medically manageable problem.”

“Earlier we used to wait till the CD4 count has dropped to 200 to start with the ART treatment. But now this treatment is given sooner. By doing so we are eliminating the risk of opportunistic infections.”

Progression of HIV into AIDS

How to prevent HIV infection

Dr Ketha says, “To prevent the HIV infection, one must follow ABC.

A - Abstinence till marriage

C - Condom must be used

For people prone to more risk, like doctors and nurses to accidental needle prick and those who have risky behaviour, they must implement safety measures to prevent themselves from this infection. One can also take Post-exposure prophylaxis (PEP) after contracting the infection. In PEP there is a golden hour bracket of 2 hours within which the medicine should be consumed."

"Based on the way the infection is detected, we doctors prescribe a 2 or 3 dose regimen. Then there is Pre-exposure prophylaxis (PrEP) that one takes before involving themselves in spontaneous sexual acts."

Is AIDS a death sentence?

Dr Ketha says, "AIDS is no longer a death sentence. Before the 2000s, people had the belief that AIDS is a death sentence as there was no cure. People even committed suicide after knowing their HIV positive status. But now, HIV is a medically manageable condition. It's similar to conditions like BP and Diabetes that have no cure but are managed by medication. With early detection of this, the condition can be medically managed and a functional cure can be found."