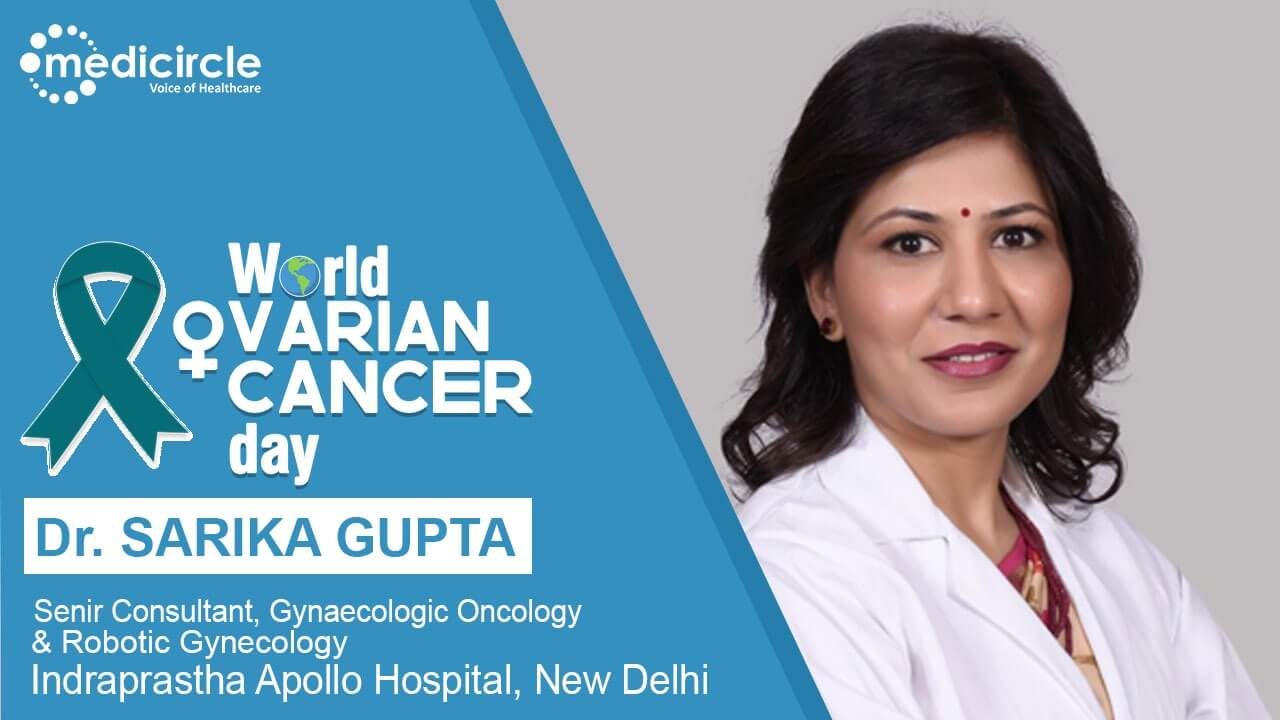 Although ovarian cancer may occur at any age, it is more common in women older than 50-60 years of age. India has the world’s second-highest ovarian cancer incidence. Since the 1980s, there has been a growing drift of ovarian cancer in our country. Medicircle is conducting an exclusive series featuring eminent oncologists and specialists so that people can get direct and more reliable information from them.

Dr. Sarika Gupta is associated as a Senior Consultant Gynaecology Oncology and Robotic Gynaecology at Indraprastha Apollo Hospital. She has accomplished her gynecologic oncology and robotic surgery training from the reputed Florida Cancer Institute, Orlando, Florida, (USA). She was awarded a diploma in Minimally Access Surgery in gynecology. She has also achieved advanced urogynecologist learning from Cologne, Germany, and Crestwood medical center, Huntsville, Alabama (USA). She has many publications in national, international journals and book chapters to her credit. She is an excellent speaker & she has been invited as faculty to multiple national and international conferences. She has herself organized many such highly appreciated academic events. She is skilled in robotic surgery & laparoscopic procedures for the treatment of all gynecologic cancers like cervix, uterus, vulvar, vaginal, and ovarian cancer.

Non-cancerous ovarian cysts are more common than the cancerous one

Dr. Sarika explains, “Ovaries is that part of the female reproductive system where eggs develop and get released every month. Ovarian cysts are either partially or completely fluid-filled sacs in the ovaries. It can be benign, which means they are non-cancerous but they can be cancerous too. Benign or Non-cancerous cysts are more common. It may be noted that it is normal to have some amount of fluid in the sacs of the ovaries for those women who are in the childbearing year and are having menstruation. But when the cysts or tumors become solid or bigger then it is a matter of concern,” says Dr. Sarika.

No significant connection between infertility drugs and ovarian cancer

Dr. Sarika emphasizes, “Obesity is a risk factor for not just ovarian cancer but all kinds of cancers. If we specifically talk of women, they have the risk of breast, uterus, and ovarian cancer with obesity. As far as age is concerned, women above 55  are more prone to ovarian cancer but many young girls can also be affected by a rare form of it. Treatment for them is different from that of women of higher age group.”

Dr. Sarika says, “Family history has a connection to the breast as well as ovary cancer. In genetic testing of a woman, if it is found that ovarian cancer has occurred due to hereditary reasons, then such women should let other women in their family know about it so that they can get the appropriate screenings done on time as a precautionary measure.

If through a genetic test, it’s found that a woman could be prone to ovarian cancer then after her family is complete and there are plans of no more babies, then as a preventive measure, ovaries can be removed in those cases.”

Dr. Sarika further mentions, “Other than this, control of obesity, avoidance of carcinogenic products like preservative-laden foods and general awareness amongst women is important. Through screening, the risk of ovarian cancer can be ascertained sometimes. Hence, women can go for annual ultrasounds particularly those who are 45 and above. However, science has still not come out with a 100% accurate screening option in regard to ovarian cancer, hence sometimes the cases can remain unnoticed even in regular screenings unlike cancer like cervix cancer where screenings, etc. have definitive results in detection of the problem.

The symptoms are also very normal like an increase in weight, abdominal distension, difficulty in digesting food, nausea, vomiting, etc. But if these symptoms persist for a long period like one month, then immediately consulting a doctor is important,” advises Dr. Sarika.