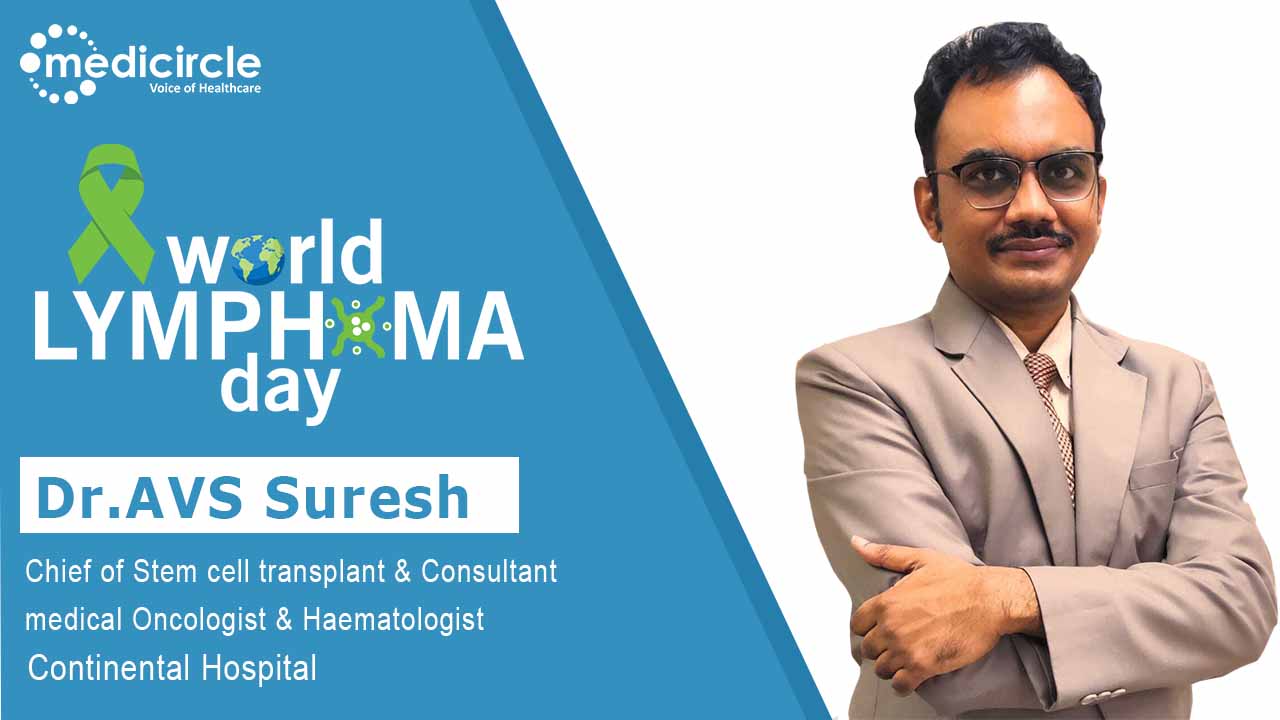 Learn from a physician-scientist, an entrepreneur, an academician and an inventor Dr AVS Suresh, the causes, risks and the science behind Lymphoma.

Lymphoma is a haematological malignancy that affects the blood cells (lymphocytes). Lymphocytes (white blood cells) are part of the body's immune system. Lymphoma affects the lymph nodes and other types such as the spleen, liver, and bone marrow. World Lymphoma Awareness Day (WLAD) is held on September 15 every year and is a day dedicated to raising awareness of lymphoma, an increasingly common form of cancer. It is a global initiative to raise awareness about lymphoma. Around the world, more than 735,000 people are diagnosed with lymphoma, every year. We at Medicircle are conducting the World Lymphoma Awareness Day Series to impart basic knowledge and encourage people to know about lymphoma to detect cancer at an early stage.

Dr AVS Suresh, is a physician-scientist, an entrepreneur, an academician and an inventor with deep science and research roots. With over 2 decades of clinical experience, he is currently serving as chief of stem cell transplant, consultant medical oncologist and haematologist at Continental Hospital. With his trained team, he did more than 400 transplants besides the management of solid tumours (5000+ cases annually). His work and talent were recognized the world over by numerous awards like the scholar in Training by AACR-2006, Best Oncologist by Times 2018, Guinness world record for conducting largest cancer screening camps -2016 & 2018, Best Entrepreneur Award from Indus Foundation and the best Startup by National e-Governance Awards 2019 and more.

Dr Suresh begins, “The word commonly used by people for lymphoma is a blood cancer. This causes confusion amongst patients that if it is a blood cancer then how is it solid? There remains a huge gap between what people think lymphoma is and what it actually is. The ‘oma’ in Lymphoma stands for tumour. Just like fibroma is the fibroid tumour, lymphoma is the tumour of lymph. Lymph is nothing but the remaining liquid when blood rushes into and out of tissues. This is drained by thin things called lymphatics which drains into a small gland called lymph nodes. The lymph nodes pump it back into the circulation. This is the lymphatic cycle. As lymph is considered as part of the blood, many make the mistake of thinking this is a blood cancer.

The purpose of lymph nodes is to act as a security force or checkpost. The border of organs is decided by lymph nodes. If you have a cold, you may notice that your neck region will be slightly swollen. Similarly, if you have injured your hand, you will see your elbow region slightly swollen. Lymph nodes make sure that the disease is contained within that zone.”

He continues, “In most cancers, we have a TNM Staging. In TNM, ‘T’ stands for the size of the tumour whereas ‘N’ is for the lymph node involved in containing cancer. So, larger the number of lymph nodes versus the number of cancer. That’s why lymph nodes are an indisputable part of the body. But if they are stretched beyond a point and are overworked, they will lose their rigour.  The loss of control because of excessive stimulation often leads to uncontrolled growth. A cause of this could be a lack of immunity which makes the lymph nodes work extra as in the case of HIV and diabetes. One of the main victims of lymphoma is farmers. Since they work with fertilizers and pesticides, they cause stress to one’s immune core. One’s that is damaged it keeps proliferating.

Dr Suresh answers, “Yes. Lymphomas are classified into T cells, B cells and NK cells. The more immature they are, the more dangerous they are. The ability to act appropriately comes with maturity. So the lymph nodes have to undergo repeated training. In the lymph nodes, there are various zones that train them by various biological mechanisms. Training occurs in the marginal zone, light zone, dark zone and more.

So the more mature the lymphocyte is, the damage happens at a more mature level. Their behaviour is more indolent, silent, modest and mild. But if the damage happens at an immature level of lymphocytes, that turns out to be very aggressive. Burkitt lymphoma, Burkitt leukemia and even Lymphoblastic lymphoma. The latter is very immature and are in juvenile form. These have a lot of energy and they indiscriminately grow and kill. This is why it is often life-threatening."

Adding on, “So the biology of the disease, that is its maturation level decides how serious it is. The other factor is core biology. A saying goes like this, B cells are better, T cells are tough. H cells are highly sensitive whereas Hodgkin’s melt like wax. Then there are different ways in which a cancer specialist measure it. They do some marker tests like CD markers and some gene testing.

So the first is the level of maturation, the second is the genetic makeup and the last is the stage. Because the higher the stage, the worse is the outcome. So if someone has stage 4 lymphoma with mature cells and bad genes, then it is not curable. But apart from these three conditions, everything else is curable.”

He mentions, “Early detection is more of a philosophical question, especially in oncology. For instance, if you don’t know what you are dealing with, you can’t interpret it. Understanding the signs and symptoms of lymphoma are very important. Unexpected fever, night sweats, itching, swelling in regions and unexpected weight loss point that something is wrong. The most common cause of lymphoma in India is tuberculosis. So if a small lymph node gets enlarged then even the doctors think it is TB or something else. So early detection concept is very tough in lymphoma. But if you have many symptoms and are an agriculturalist or immunocompromised person then getting lymphoma is a possibility for you.”

He says, “If we don’t stimulate the lymph node, they don’t proliferate, so there is no risk of genetic alteration which can lead to lymphoma. The question that naturally arises is what stimulates lymph nodes? Firstly we need to know the concept of immunity. The concept is that immunity is a defence mechanism in your body that protects you from hazardous things from within and outside. They patrol in our body and look for intruders.

When a bacteria, virus or cancer comes they recognize it and kill it. The less you stress your body the less burden the lymph nodes will have. For this, it is important to maintain the circadian rhythms. Our body is not meant to be awake at night. The immune system is not meant to work at night. If you force it to work at night then there will be a disbalance. Avoid eating junk food or outside food. That food is not meant for your tummy. The immunity will tire itself on this. Your immune system considers red meat and fat-rich foods as enemies.”