Learn the symptoms and curability of blood cancer, especially of lymphoma 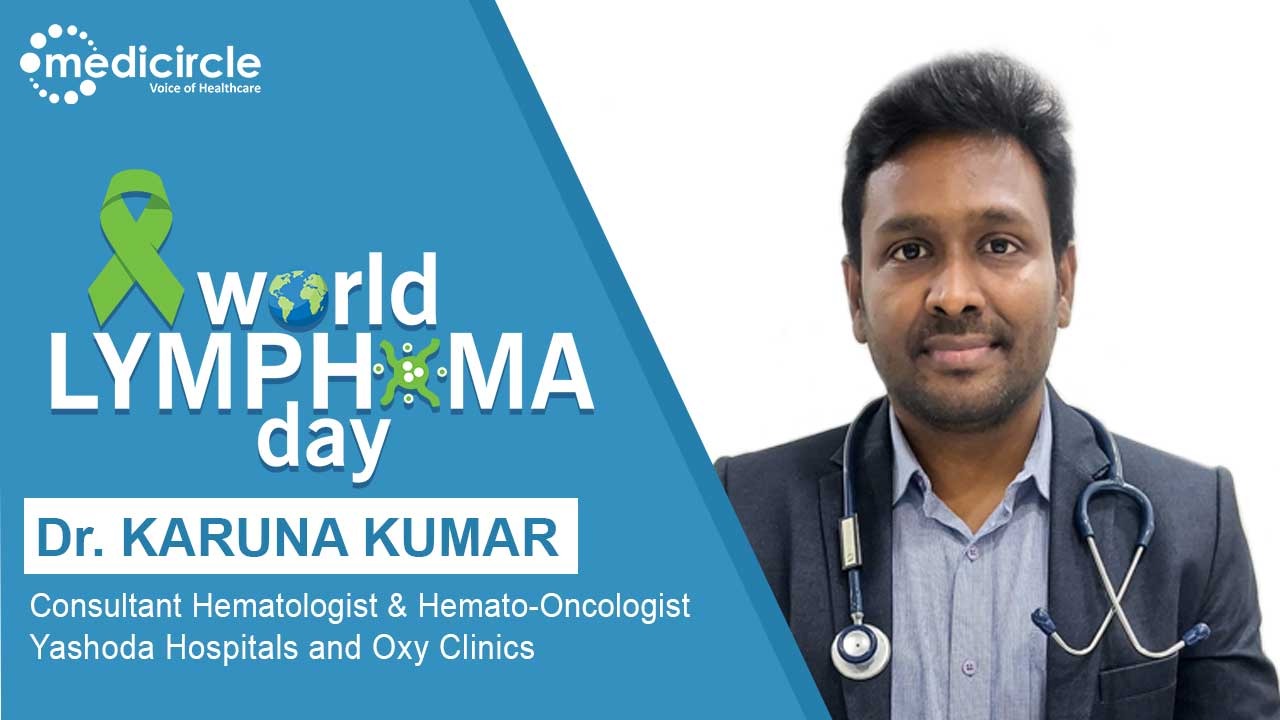 Understand the types of blood cancers with Dr Karuna Kumar. Lean the symptoms and treatments available for lymphoma, the cancer of the lymph nodes.

Lymphoma is a haematological malignancy that affects the blood cells (lymphocytes). Lymphocytes (white blood cells) are part of the body's immune system. Lymphoma affects the lymph nodes and other types such as the spleen, liver, and bone marrow. World Lymphoma Awareness Day (WLAD) is held on September 15 every year and is a day dedicated to raising awareness of lymphoma, an increasingly common form of cancer. It is a global initiative to raise awareness about lymphoma. Around the world, more than 735,000 people are diagnosed with lymphoma, every year. We at Medicircle are conducting the World Lymphoma Awareness Day Series to impart basic knowledge and encourage people to know about lymphoma to detect cancer at an early stage.

Difference between leukaemia and lymphoma

Dr. Kumar begins, “Lymphoma is nothing but a type of blood cancer. Blood cancers are usually of three types leukaemias, lymphomas, and myeloma. All these blood cancers arise from white blood cells. We have white blood cells in our blood and also in a structure called lymph nodes. We all know what tonsils are. These tonsils are a kind of lymph node. We have similar nodes in our body like in the neck area, inside the thorax, and inside the abdomen. Our white cells provide us with a defense system. They protect us from infections. Similarly, lymph nodes that have white cells in them, have the immune system as their main function. Cancers arising out of these white cells are blood cancers. And if the cancer is restricted to the lymph nodes then it is called lymphoma. If cancer happens to the cells which are in the blood, it is leukaemia. Leukaemia is cancer that flows in your blood, whereas in lymphoma these cancer cells are confined to the lymph nodes.”

He says, “Lymphoma is a type of cancer. Cancer basically is an uncontrolled proliferation of cells. So, here the cell multiplies unwantedly and excessively. This unusual growth in lymph nodes can be seen in the lymph nodes found in the neck or other areas in the body. Under normal circumstances, these are not palpable and you cannot feel them. But when there is lymphoma, there is excessive growth of white cells in these nodes and they become much bigger. So, the first and most common symptom of lymphoma is palpability and large lymph nodes. Then other symptoms depend on the location of the lymph node. If lymphoma occurs in the abdomen or in the thorax, then it may start compressing other vital structures and can even cause dysfunction to them. Apart from these cancer per se have certain symptoms like persistent fever, weight loss, loss of appetite, and night sweats."

He adds, “Not all enlargement of lymph nodes are cancer. The most common causes of enlargement are infections. So if the lymph nodes become palpable don’t panic that it is cancer. Most probably that lump would be non-cancerous. Check how many lumps are there? What is the age of the patient? What are the other symptoms associated?  These other factors too have a role in checking if it is lymphoma or not.”

He says, “When we hear the word cancer, the first thing that comes to our mind is ‘Is it curable?’ When you look at cancers and blood cancers, in particular, not all are dangerous. There are many cancers that can be cured. Then there are cancers that can be treated with just a simple tablet. In low-grade lymphomas, which are not symptomatic, the doctors just wait and give no treatment. In the case of other lymphomas and high-grade lymphomas, we expect the cure rates to be at 90%. This is especially seen in Hodgkin's lymphoma where the cure rates are high. The response rates and the control rates are high too. Recently, even in non-Hodgkin’s lymphoma, we can expect up to 60 to 70% of remission rates.”