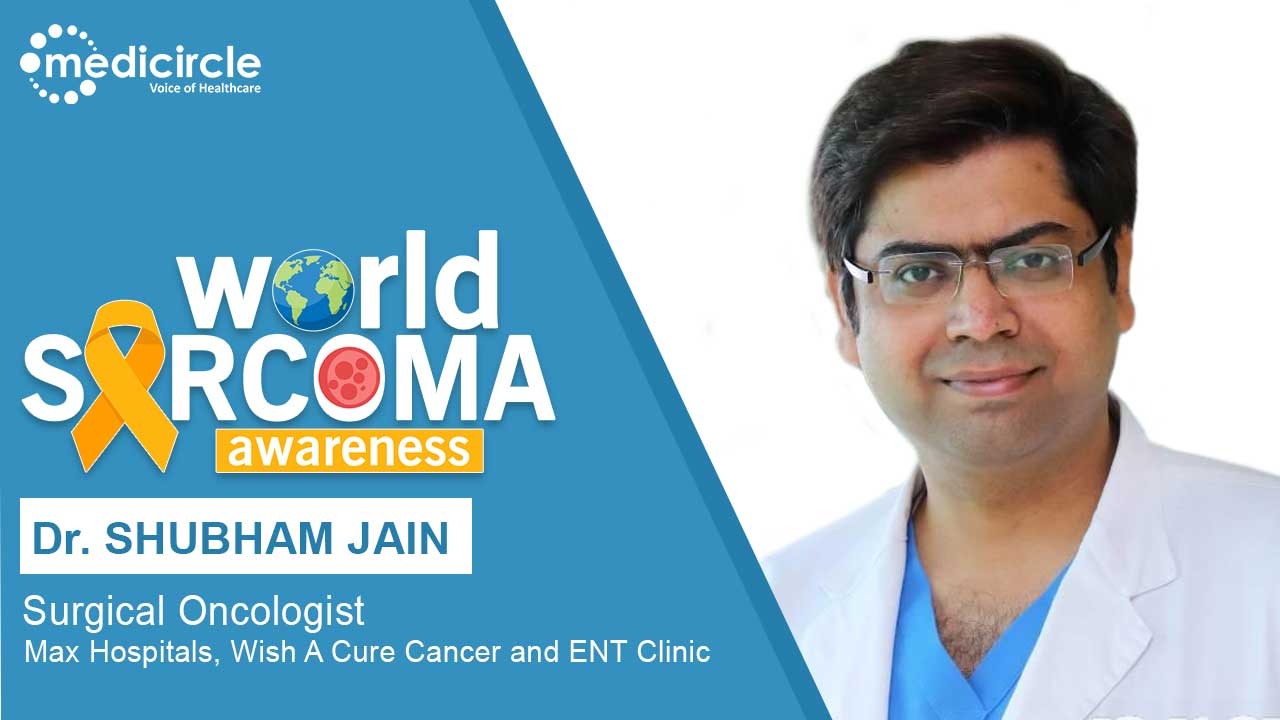 As early detection of any disease is key to success, it is very much important that sarcomas should be detected early. It is a rare medical condition with no specific triggering factors. Patients having sarcoma should not be disappointed, Dr. Shubham Jain, Surgical Oncologist, Max Hospital

Sarcoma is the general term for a broad group of cancers that begin in the bones and the soft tissues. Bone sarcomas are rare tumors approximating 0.2% of all cancers. Soft tissue sarcoma forms in the tissues that connect, support, and surround other body structures. This includes muscle, fat, blood vessels, nerves, tendons, and the lining of the joints. It has an average of 2.1% of the frequency range in males and 1.2% in females. As sarcoma awareness days are absorbed every year on July 21, we at Medicircle, are conducting an exclusive series to raise awareness about this rare medical condition.

Dr. Shubham Jain is a renowned Surgical Oncologist practicing in South Delhi. He has been a practicing Oncologist for 11 years now. He performs Open, Laparoscopic, and Robotic Cancer Surgery at Max Hospitals and is also available for consultations at The Cancer Clinic in Green Park Extension, New Delhi. He is certified in da Vinci robotic surgeries as well. He believes in health care that is based on a personal commitment to meet patient needs with compassion and care.

Dr. Shubham explains, “Obesity does not cause cancer but often it has been observed that cancer is detected to be in advanced stages in obese people. Treatment of obese people is a little more difficult with not-so-good outcomes. If there is any lump in our body, it will be caught soon in a thin patient than in an obese patient. Such lumps are detected late in an obese patient, so they are found in a slightly advanced stage. As early detection of any disease is key to success, it is very much important that these kinds of diseases should be detected early. Obesity itself increases the risk of many other diseases, which directly impact the outcome of the treatment.

Dr. Shubham says, “The chances of sarcoma also increase with increasing age. Sarcoma is such a diversified condition seen in almost all age groups of people, be it children, adults, or senior citizens. It is not restricted to any specific age group.

Dr. Shubham emphasizes, "As it is a rare condition, not much is known about it and research is still going on. There are no such triggering factors for sarcoma. Most of the research signifies that sarcoma is generally due to any genetic makeup. Other reasons may be exposed to radiation or secondary sarcoma. Sarcomas can be due to viral infection or chemical exposures too. There are no specific triggering factors for sarcomas.

Dr. Shubham mentions, “60-70% of patients recover from sarcoma. As the disease advances, the rate of survival decreases. In stages I and II, the disease is localized, 80-85 % of patients recover. If sarcomas have affected nearby parts, the survival percentage decreases to 50-55% and if it has reached other organs, the success rate declines to 15%. Different stages of sarcoma correspond to their respective outcome, treatment needed, and success rate. With the advancement in medical science, treatment of the fourth stage is also possible to some extent. Thus, patients of any stage should not be disappointed and should maintain physical fitness.