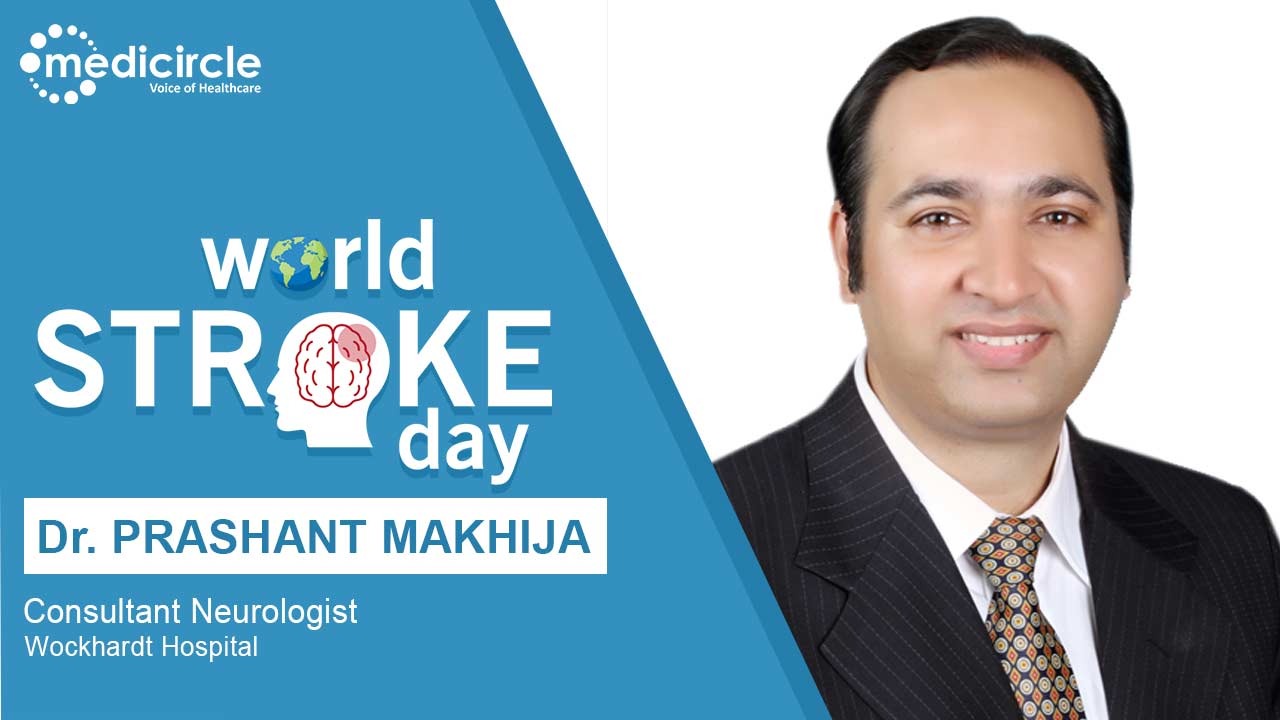 Stroke is a treatable condition. Time is everything when dealing with stroke patients as stroke is a medical emergency. Learn some basic symptoms of stroke with Dr. Prashant Makhija

The brain is an extremely complex organ that controls various body functions. If a stroke occurs and blood flow can’t reach the region that controls a particular body function, that part of the body won’t work as it should. A stroke occurs when a vein in the brain bursts and bleeding occurs or a blood clot forms or when there is a blockage in the blood supply to the brain.  Stroke is one of the leading causes of death and disability in India. The incidence of stroke in India has increased by 100% in the past few decades. Stroke incidence in India is higher (194-215 per 100,000 population) in rural areas as compared to the national average (119-145 per 100,000 population).

World Stroke Day is observed on October 29 to underscore the serious nature and high rates of stroke, raise awareness of the prevention and treatment of the condition, and ensure better care and support for survivors. The annual event was started in 2006 by the World Stroke Organization (WSO). We at Medicircle are conducting the World Stroke day Awareness Series to draw awareness on the symptoms and treatments available for stroke to reduce the incidence of stroke.

Dr. Prashant Makhija is a Consultant Neurologist at Wockhardt Hospital, Mumbai. He has also worked with Seven Hills Hospital, Mumbai as a Consultant Neurologist. He has been facilitated with the young investigator award by the 10th World Stroke congress 2016, Hyderabad. He has also been awarded the Budur Krishna Murthy silver jubilee conference award, 2017.

Stroke is common in young adults too

Dr. Prashant explains, “A stroke occurs when the blood supply to part of your brain is interrupted or reduced. It takes place when a blood vessel that carries oxygen and nutrients to the brain is either blocked by a clot or bursts (or ruptures). When that happens, part of the brain cannot get the blood (and oxygen) it needs, so it and brain cells die. Thus, patients get symptoms of a stroke."

Dr. Prashant expresses, “Stroke is very much treatable. Its well-defined treatment is available but timely treatment is very important. Timely treatment is so important that 32,000 brain nerves may damage in one second and 1.9 million neurons may die in a minute. Every one-hour loss without treatment, the brain ages by 3 and a half years. Time is very important in the treatment of stroke and hence it becomes an emergency to prevent disability and death. If you see any stroke symptoms, take the patient immediately to the stroke-ready hospital.”

Dr. Prashant mentions, “Stroke treatment can be divided into two parts. The first is preventive treatment. Patients having comorbidities should avoid alcohol and tobacco use to maintain their BP and sugar in control. But if anyone gets symptoms of stroke, he/she should be taken to a stroke-ready hospital as early as possible. If a patient reaches the hospital on time within 4.5 hours, we can give anti-clot busting medications/ injections immediately which helps to recover the patient if not fully then partially. In some cases, mechanical thrombectomy technique can also be used.”

Dr. Prashant says, “Time is everything when dealing with stroke patients, but many hospitals are not "stroke ready". A stroke ready hospital is one with

Dr. Prashant adds, “First is to recognize the stroke symptoms. Symptoms of stroke are always sudden. Symptoms include

Family members should not put anything inside the mouth, this can cause choking due to unconsciousness. The first and foremost thing to do is to recognize the stroke symptoms and reach a stroke-ready hospital as early as possible.