Symptoms and treatments for stroke explained by Dr Pruthviraj Dabarase 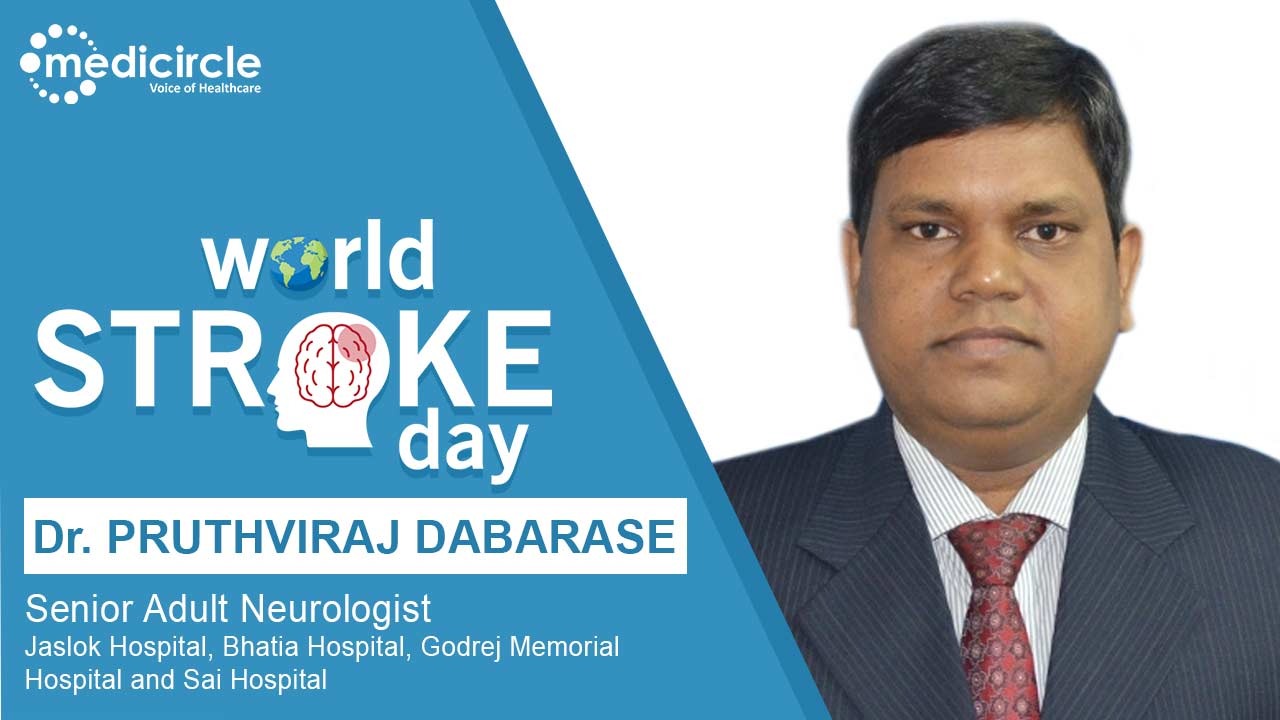 With strokes, a delay of one minute can cost the patient damage of 20 lakh neurons. Recognise the signs of stroke and take the right action to help your loved ones with the help of Dr Pruthviraj Dabarase.

The brain is an extremely complex organ that controls various body functions. If a stroke occurs and blood flow can't reach the region that controls a particular body function, that part of the body won't work as it should. A stroke occurs when a vein in the brain bursts and bleeding occurs or a blood clot forms or when there is a blockage in the blood supply to the brain.

World Stroke Day is observed on October 29 to underscore the serious nature and high rates of stroke, raise awareness of the prevention and treatment of the condition, and ensure better care and support for survivors. The annual event was started in 2006 by the World Stroke Organisation (WSO).

Dr Pruthviraj Dabarase is Senior Adult Neurologist practising in Mumbai. His current attachments are Jaslok Hospital, Bhatia Hospital, Godrej Memorial Hospital and Sai Hospital, Vikhroli. His speciality experience spans over 10 years. He has a special interest in Stroke, Headache, Epilepsy and Movement disorders. His goal is to provide compassionate and comprehensive care at affordable fees.

What is a Stroke?

Dr Dabarase begins, “The meaning of stroke lies in the world itself, stroke means strike. Like the strike of lightning. One of your body parts or your senses stops working. This occurs suddenly. There are different types of stroke wherein different body parts or senses are affected.”

How does stroke affect our mind and body?

He says, “This depends upon which blood vessel is getting blocked and where it is occurring. Depending upon that the stroke may involve one side of the body, or speech or just one’s sense of balance. So, a stroke can affect any part of our body.”

Symptoms of a Stroke

He explains, “There could be a sudden onset like lightning striking.  So, if you suspect something, check the person’s face. Check if there is any change while they speak or if there is sagging. Also, check one’s arm or leg and whether it is working or not. Check for any imbalance, spinnings or vomiting.”

“The person may find it difficult to talk and it would also create difficulty for others to understand. Many times a person starts talking gibberish. Many times people and even doctors think it is a psychotic disorder but it is not, it is a stroke.”

"When the stroke occurs in the brain, it is generally a part of the visual field which is affected. Here, the visual field gets affected in both the eyes. For instance, if you have a stroke on the right side of your brain. In both your eyes, you will not be able to see the left side.”

"There are approximately 10,000 crore neurons in the brain. And if a stroke occurs and you don't see your doctor immediately then a delay of every minute will cost you 20 lakh neurons. The theme of this year is hence "Minutes Can Save Lives.”

He mentions, “First step is to ring the hospital and check for the availability of a bed and get admitted. The sooner you reach the hospital the faster the treatment can be provided."

"Once the patient comes to the hospital, there are two strategies that can be initiated. The first step here is to detect whether there is a stroke or not. Once this is established, evaluation takes place to check whether there has been a blood clot or whether bleeding has happened."

"There is a golden period of four and a half hours (three hours for diabetics) wherein the doctor can with an injection to dissolve that clot. This treatment has its own limitations. The treatment can dissolve clots in other places which can cause bleeding. But this method definitely helps stroke patients."

"The last thing is to establish what is the cause of stroke. We have to establish the cause of the stroke and make sure the stroke burden and subsequent strokes doesn't affect the patient. Stroke rehabilitation is also important and it consists of physiotherapy and prevention of formation of a blood clot."

What care should we take before meeting the doctor?

He suggests, "Aspirin can be given in the dose of approximately 75 to 150 milligram before reaching the hospital. This could be controversial as we don't know at that point in time what type of stroke it is. Also, don't reach an intermediary doctor and directly reach the hospital"