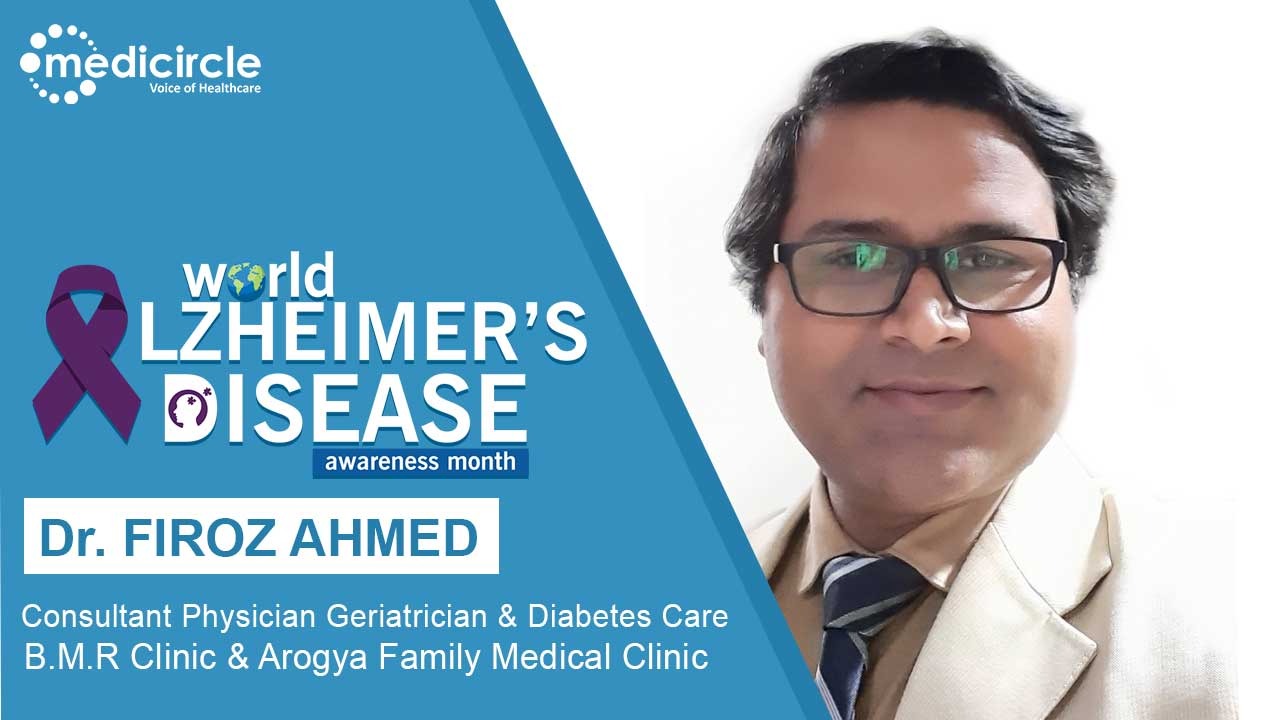 The world celebrates Alzheimer’s Day to raise awareness about dementia. Dementia is a collective term for a cluster of symptoms. There are difficulties with memory, language, and other thinking-related skills. 70% of all dementia cases are Alzheimer’s, making it the most common form of dementia. According to WHO, 47 million people, or 5% of the elderly population suffer from dementia as of 2015. By 2030 the number of affected will rise to 75 million and by 2050 it will be 132 million. GlobalData estimates 16 countries where 6% of all 60 years old and above face dementia. India features in this. At least 4 million Indians suffer some form of dementia.

Dr. Firoz Ahmed has work experience of 10 + years as a clinician in private practice. He has worked in the fields of geriatric medicine and general medicine. He is working with Fortis hospital, New Delhi. He is also graduating in 2020 with MBA in hospital administration which is added to his merits apart from being a professional doctor.

Difference between Alzheimer's disease and Dementia

Dr. Firoz Ahmed says, “Dementia is the cause of mental disorders. In this dementia, the neurons of the brain are affected due to underlying disease. This causes-

However, the consciousness is intact. It is commonly seen in the elderly above the age of 60 + years.

Whereas, Alzehoemeros is the most common cause of dementia, which is seen in 80 + years. Alzheimer's is a type of dementia. Because Of aging the neurons shrink in the brain. In Alzheimer's, the amyloids increase in the brain and cause excessive deposition. This will form plaques in the brain. This results in the loss of functions of storage and transmission of information. The function of the synapse gets affected resulting in lower levels of acetylcholine. Shrinkage of neurons causes shrinkage of the brain.

Dr. Firoz Ahmed says, “Dementia is a group of diseases. There are 70 causes of dementia

Dr. Firoz Ahmed says, “Alzheimer's and Dementia have the same characteristics. But, there is an additional neuronal loss in Alzheimer's which leads to damage of the brain after brain shrinkage. There is a part called the hippocampus which is the memory storage area. In Alzheimer's, the hippocampus gets affected. The warning signs of Alzheimer's are -

We need awareness about warning signs of Alzheimer's to be detected early. People with dementia have higher chances of  Alzheimer's. “

Risk factors of dementia and Alzheimer's

Early age of Alzheimer's and Dementia

Dr. Firoz Ahmed says, “Dementia can be caused at an early age like forgetting small things. There is a possibility of dementia in the middle age group.