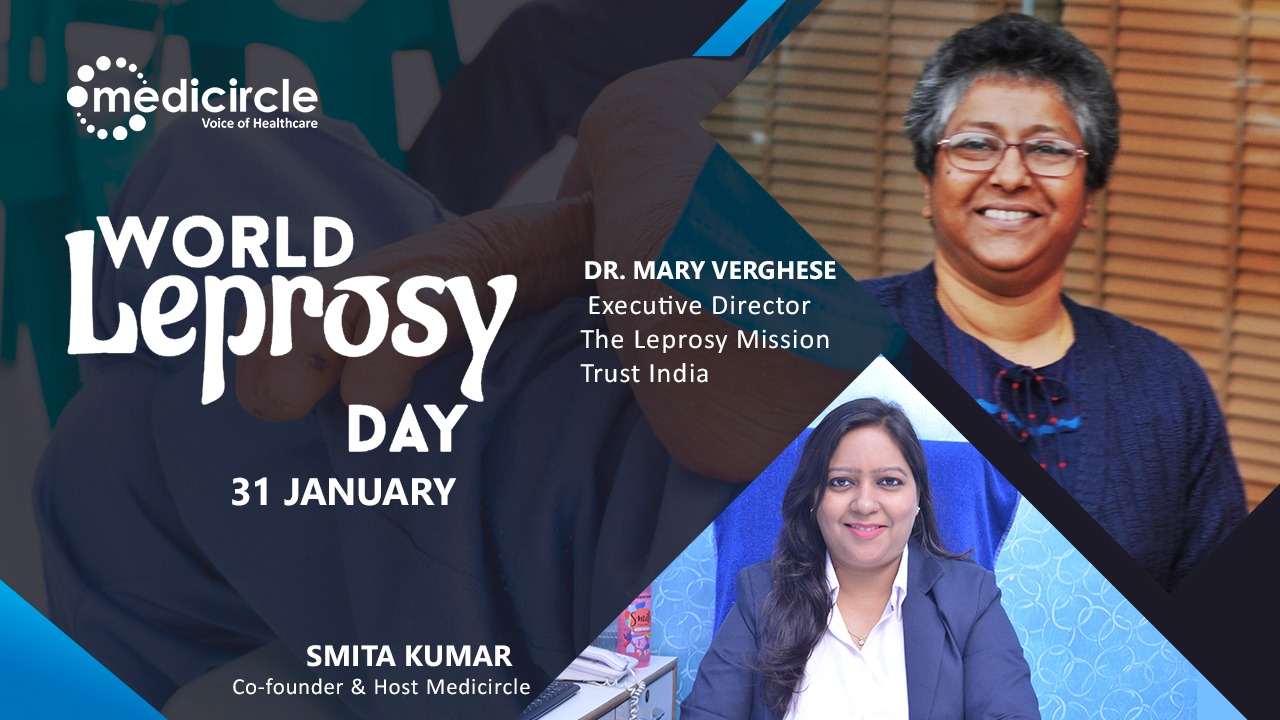 “There is a very wrong notion about leprosy as being a curse from God, or a myth that you've committed some sin either in this life or previous life, and now you're being punished for it,” says Dr. Mary Verghese, Executive Director, The Leprosy Mission Trust India.

Dr. Mary Verghese, Executive Director, The Leprosy Mission Trust India, is a postgraduate medical professional and has got a long working experience in public health and development initiatives. Her experience includes direct implementation of Community Health and Development interventions, providing technical and management support to reproductive and child health programs, curriculum development, training and mentoring of trainers, evidence-based research, and advocacy to influence policy and practice. She's also managing a large global fund that supported the program through a consortium of partners to improve treatment, care, and support to people affected by HIV AIDS.

The Leprosy Mission Trust India is the largest leprosy-focused non-governmental organization in India and is headquartered in New Delhi, India. The organization works with people affected by leprosy and other neglected tropical diseases (NTDs), people with disabilities, and marginalized communities, especially women.

Dr. Mary explains, “The Leprosy Mission Trust India is a very old organization and has been in existence for nearly 147 years. It has always served people affected by leprosy and has a diverse range of programs to support education, vocational training, community empowerment projects, search and trade training, and advocacy. We are spread across 10 states and deliver to 14 hospitals, which have general services as well as specialized leprosy services which is the core of our program. We work very closely with the government and other stakeholders both at the national and state level. We do diagnosis and management of leprosy complications, rehabilitation of people, especially young adults, whether they are self affected or from leprosy background, they don't have equal opportunities. Many of them don't have the aspirations so we train them to provide vocational skills, life skills, provide placements so that they have community projects all across them providing access to government schemes, livelihood opportunities so that people are included in the communities that they live. So our tagline says all of it, that healing, inclusion, and dignity is what we stand for. We do research through a molecular lab and other operational research focusing around leprosy and training of many of the healthcare providers, whether it's medical doctors or physiotherapists, occupational therapists, paramedical workers, that helps to build leprosy expertise of people have within all stakeholder groups,” she says.

Dr. Mary explains why did Leprosy re-emerge after being declared eliminated as a public health issue, “Early detection and treatment are the basic tenets of managing leprosy. In the 1980s, when the multidrug treatment came into being there was this goal of achieving elimination and proposing the elimination of leprosy essentially in 1 per 10,000 cases of leprosy. So in 2000 that was eliminated globally, in 2005 many countries including India, declared leprosy being eliminated as a public health issue. But the vertical program of leprosy integrates with the gym and care services. So most people whether educated or uneducated, the community at large thought leprosy is no more a problem and most of the cases that came into the primary health care centers were through voluntary reporting. So the general awareness of leprosy dwindled, and people really asked whether leprosy is a problem and because the general awareness dwindled, people really did not come into the primary health care centers. And over time awareness was low and there was a stigma attached to leprosy. So, even if they had signs and symptoms, they would not report to the general healthcare services. So, what we noticed was since 2005 - 2015, there has been a stagnation of new case detection or there has been a very slow reduction in the annual new case detection and there are more visible deformities in the children also reported, which actually meant that transmission of leprosy is still on. But since 2016, the government has taken very proactive steps, they started having active case detection campaigns, they started having awareness campaigns and in 2020, the new operational guidelines for active case detection, and regular surveillance for leprosy patients have been introduced into the regular program. So, those are very positive signs, seeing how things have emerged,” she says.

Many wrong notions about leprosy

Dr. Mary sheds the light on leprosy continuing to be stigmatized in India, “There is a very wrong notion about leprosy as being a curse from God, or a myth that you've committed some sin either in this life or previous life, and now you're being punished for it, many people even think that it's hereditary if you're from leprosy affected family, people don't want to get into a marriage, because they think the offsprings will be affected. So there are a whole lot of notions, which are actually not true. Leprosy is a bacterial infection, it is totally curable and treatment is available and one can prevent disability by following points:

Community awareness - It is one thing which really needs to be enhanced so that people know that these are the early signs of leprosy, and if you have these signs you should report to the medical facility as the treatment is available in all the government facilities free of cost, and you can get complete treatment. So awareness definitely has to increase about leprosy and the other thing is the availability of treatment which has to be mentioned across some of the preventive measures that need to be taken up, most people report to the non-formal practitioners’ in the vicinity. Religious leaders also play an important role because they have a lot of influence on the congregations and they can be a real positive factor in testimonials of people affected by leprosy who are cured and are living with dignity as that rules out the negative image of leprosy and instills a sense of confidence in people.  Counseling plays a very important role. So these are some of the very important measures.  Medical colleges - like doctors and paramedical workers need to have some sensitization on leprosy when they are training. Because many people don't see leprosy when you're learning.  Contacts tracing if you're a patient and if you do contact tracing and you get profile access that also breaks the transmission. Support groups are also very important.

So these are all intertwined and these are some of the measures which one needs to take,” she says.