Relation of Diabetes with thyroid and obesity - Medicircle 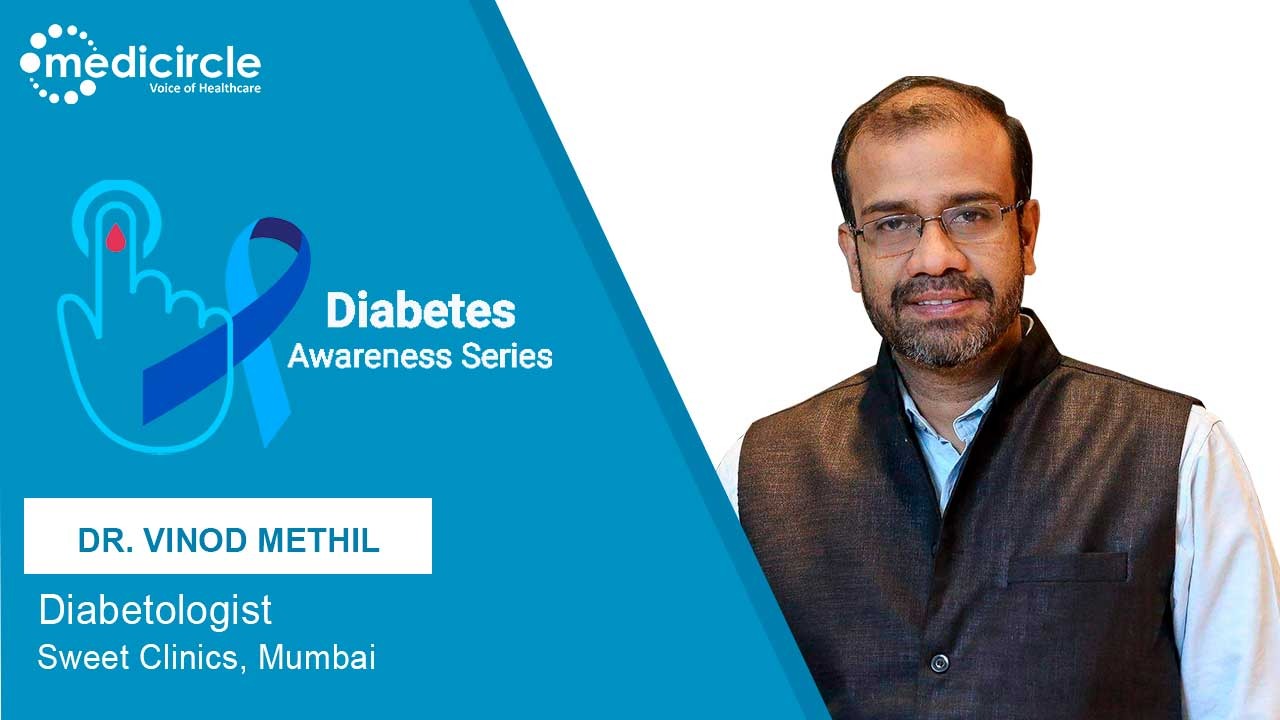 Learn more about the association of diabetes with thyroid and obesity. Learn how diabetes cannot be reversible but a state of remission can be achieved.

Dr Vinod Methil is a senior Consultant Diabetologist practising in Navi Mumbai for the last 16 years. He has done his MBBS and post-graduation Diploma in Diabetology from Topiwala National Medical College and B.Y.L.Nair Hospital Mumbai University. He has also trained in the esteemed All India Institute for Diabetes, SL Raheja Fortis Hospital, and was a Clinical Associate there for two years. He has worked in United Kingdom NHS in medicine for 2 years.

Dr Methil begins, “The answer for this is a big ‘no.’ Drugs used to treat diabetes are not immunosuppressant. These drugs act by increasing the insulin action or by pushing the pancreas to produce more insulin. The mechanism of action is different compared to other drugs.”

“There are certain drugs that can be immunosuppressant like steroids and other disease-modifying drugs. These drugs actually cause the blood sugars to go up. Drugs that are used for treating diabetes do not suppress immunity in any way. On the contrary, it is diabetes that is immunosuppressant in nature. High blood sugar can suppress the immunity of the individual.”

“This is done by various mechanisms. They affect the body's fighting mechanisms and those cells that produce various antibodies. These 2 processes are affected by high blood sugar levels. So by taking the diabetes drugs, this condition gets treated and the body’s immunity gets better. In the COVID pandemic, it was found that people who had uncontrolled sugar levels had a higher risk of catching the covid infection. Due to such instances, it is advised to keep diabetes under control.”

Are diabetes and thyroid-related?

Dr. Methil says, “To answer this question I would say ‘yes and no.’ For this, we need to understand the different types of diabetes. There are 2 important types of diabetes. The first is type 1 diabetes. This diabetes is caused due to autoimmunity where the antibodies formed to destroy the pancreatic cells which secrete insulin. This causes insulin deficiency. So in patients with type 1 diabetes, the risk of getting thyroid is high. Here,1 in 3 patients can get a thyroid problem. A thyroid problem too is a disease of autoimmunity.”

“But when one has hyperthyroidism, where the thyroid levels go up, the blood sugar level too goes up. These things are taken into consideration when we treat diabetes along with the thyroid.”

Relation of diabetes and thyroid with Obesity

Dr. Methil adds, “There is a connection between these 3, especially for type 2 diabetes. The prime cause of type 2 diabetes in today’s generation is obesity. Obesity is caused due to one’s lifestyle. Lack of exercise and eating the wrong foods can lead to obesity. One is more likely to get central obesity where the fat gets stored in the tummy. This affects insulin sensitivity and can turn into type 2 diabetes. In hypothyroidism too the patient starts putting on weight which leads to obesity and diabetes."

Can diabetes be fatal?

Dr Methil mentions, “Yes diabetes can be fatal. Globally around 1 to 1.5 million deaths are occuring annually due to diabetes. Diabetes is a disease that affects multiple body parts like kidneys, eyes and heart. In fact, it poses the biggest risk to heart problems. 80% of diabetic patients usually die of a heart attack.”

“Diabetic patients also face many other problems like kidney failure. 2/3rds of patients on dialysis are due to having diabetes. Diabetes also creates many immunity compromises and this can make one vulnerable to infections. Diabetes also affects the blood vessels and many develop gangrene. So diabetes is a root cause of many severe diseases.”

Dr. Kumar elaborates, “There is a lot of hype around reversibility on social media platforms. I would like to point out that it isn’t reversible but there is remission that can be achieved. Remission is possible when the diabetic patient becomes totally drug-free, his/her A1C test becomes 6.5 and he/she is able to maintain this state for more than 3 months.”

“If a patient has achieved remission and then he/she doesn’t follow a good lifestyle and gains weight, then his sugar levels will again go up. So it is not like gaining the remission state once will give you lifetime freedom. One cannot go back to their old lifestyle and should instead maintain a healthy lifestyle.”

“Diabetes can be reversible but only for a few people. A few years back the notion was that diabetes is a chronic and progressive disease. So people believed that once you get diabetes, it will stay with you for a while. But the new studies have shown that people who lose 15% of their body weight in a certain period of time, will be able to achieve a remission state. This works where the cause of diabetes is obesity.”

“Here there is a deposition of fat in the liver and pancreas which affects the insulin action and secretion. By losing weight, the fat levels go down. Losing a gram of fat from the pancreas can help rebound insulin production. This is possible by having a very low-calorie diet. Again this isn't possible for all. In that study, only 46% of the patients could achieve a state of remission.”

“This is only possible for those who had diabetes for less than 5 years or better for less than 2 years. Those who are younger and who are not taking too many tablets. They should be physically and mentally healthy. These patients have a good chance of remission. Even after going into remission, they would have to maintain the healthy lifestyle of diet and exercise.”