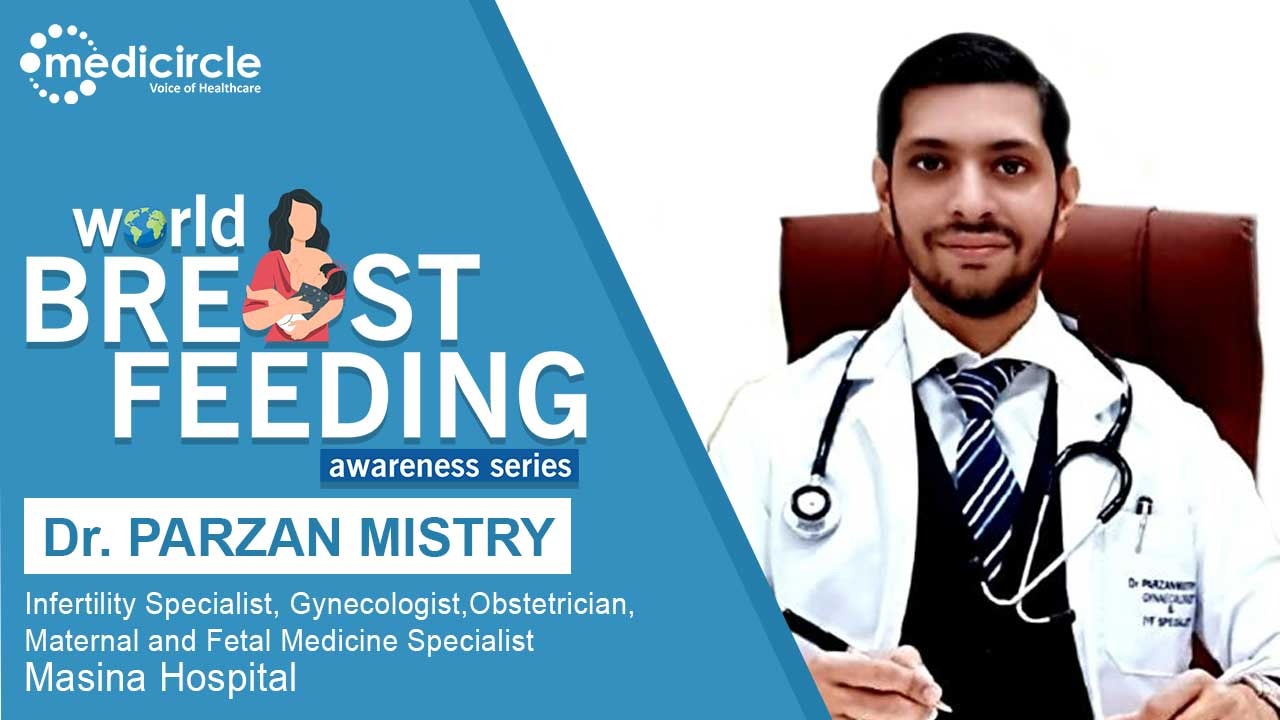 Dr Parzan solves all breatfeeding doubts from how much feed to give to the challenge of breastfeeding during Covid.

Dr. Parzan Mistry is a Consulting Obstetrician Gynaecologist and Specialist in Reproductive Medicine attached to major hospitals in Mumbai. Dr. Parzan has done his Master's in Surgery - Obstetrics, and Gynecology from the prestigious Grant Medical College. Post MS he has done his DNB in Obstetrics and Gynecology from Maulana Azad Medical College. He has also done his Master's in Reproductive Medicine from the UK and received Fellowship in Reproductive Medicine from the Indian College of Gynaecology. Dr. Prazan has also done his fellowship in minimal access surgery and is a member of the National Academy of Medical Sciences. He has been an active member of the Indian Society of Assisted Reproduction. Dr. Parzan has been awarded many awards like Young Achievers Award and First prize on top contraception, the prize for best dissertation, and Dr. CM Shah's prize on High-Risk Obstetrics. Dr. Parzan has also authored chapters on fibroids, infertility, progesterone, and IPF legal issues in various textbooks.

How long should the baby be breastfed?

He adds, "Here we should know the basics. The baby should be feeding on demand. Most of the newborns demand feed. On the other hand, a newborn baby should be fed at least 8 to 12 times a day, for the first month. Or fed within one to three hours. Breast milk initially is easily digested because of its constituents. There are five types of breast milk, starting from what is called colostrum and then it eventually goes on to the final milk. The initial breast milk is easily digested, so the newborns tend to get hungry very often. Feeding the newborns also stimulates the breast to produce more milk. This is very essential, as it helps in the milk production and in sufficing the hunger and thirst of the baby. Eventually, as the baby grows old, the frequency of the feed decreases. When the baby is around 1 - 2 two months old, the frequency of the nursing decreases from 12 to 7-9 times a day."

How to calculate the gap of 3 hours in between feeding?

He tells, "The breastfeeding should be calculated as the starting time and not the end of the field. If you start breastfeeding at 8 AM, the next three hours will be 10. The next week should start at 10 AM. Note that if breastfeeding has happened from 8 - 9, it should not start from 9 to 11. From the start of the feed, the timing should be calculated. A Golden Rule is that a newborn should not go more than 4 hours without breastmilk, in the initial stages of life. As the baby grows old, the frequency of the feed tends to decrease, from 3 - 4 hours. Babies generally have feeding patterns which change over time."

"The liquid gold, or the breast milk comes from the colostrum which is a thick, yellowish orange liquid. This is the first milk and is very important. Most women don't feed this as they are exhausted from the delivery. So many babies miss out on colostrum. Colostrum not only gives the baby essential nutrition but also protects babies against the diseases which will happen in the future like asthma, diabetes. It is very rich in immunoglobulins. This also gives the baby to suppel and safely coordinate the swallowing and breathing movements."

Make sure the Baby is Adequately Fed

He stresses the importance, "It is always important to check whether your baby is adequately fed or not. And the way we come to know whether the baby is adequately fed or not is by looking at the baby's urine output and how frequently the baby is pooping. So over the second or the third day, a minimum of two to three wet diapers and around two stools indicate that the baby is fed well. As the baby progresses, five or more wet diapers and the urine tends to become a bit paler. From dark yellow, it goes to pale yellow indicating that the baby is fed well. Now by the fifth month, the baby should at least have 2 yellowish stools. Generally one should breastfeed for six months exclusively, followed by a weaning period where the babies are introduced to solids. This shouldn’t mean that the breastfeeding should discontinue, the breastfeeding goes on for another one and a half years."

Solving the big debate, he says, "It's not likely that a baby on formula will tend to pass more urine as compared to a breastfed baby. Like I said, six to seven, if less than worrisome if more it is okay. So what we should be worried about is the baby wetting fewer diapers. Because that would mean the baby is not fed back. Now, most of these formula-fed babies or those babies that are mixed fit (tend to take breasts as well as formula feeds), have a lot of hunger pangs. Here most of the parents think that since they are feeding the baby as per the instructions then the baby will be well fed. The crying would be because of some other factor. First of all things like colic, reflux and other conditions come a bit later in the baby’s life. Other ways to check are the number of diapers used and the consistency of the stool along with the color which should be mustard yellow. Most importantly it is the weight gain that indicates a well-fed baby."

What is breast engorgement and what can women do about it?

He notes, "Most of the time, breasts normally tend to get engorged, even routinely in pregnancy. This is because there is an increased amount of blood supply to the breast. It's normal to have some amount of breast engorgement. Then there is the milk getting produced which tends to produce some amount of engorgement. But if the feeds are not given properly, or the baby is not sucking well or the mother is not emptying the breast properly, then there is a problem. This is called pathologically Breast Engorgement."

Moreover, "This may lead to Milk Fever, or when the breast gets engorged and there will be a run-down feeling. Only when the mother continues to empty the breast will the fever go down. If not tackled at the right time, it can also cause infection and inflammation around the breast which is called mastitis. It is very important to empty out the breast. There are different types of milk like foremilk and hindmilk. The former takes care of the baby's thirst and the latter takes care of the baby's hunger. To quench the thirst and hunger the emptying of the baby is very important."

On Using Aid for Feeding

He goes saying, "There are devices, mechanical as well as electronic pumps. With the electrical suction pumps, both the breasts can be emptied out at the same time. And it's very important that you know you don't need to remove the breast milk and throw it away. It's very important that this breast milk can be used to feed the babies. Newly pumped milk can stay at room temperature for up to four hours. If you immediately pump out the milk and put it in the refrigerator, it can go for around four days. If you put it in the deep freezer, it can go up to even one year. Once you take out the milk from the fridge or the freezer, what you just need to do is take a pan and add some water. Make a water bath and put the milk container in it. Once the breast milk is out from the refrigerator, it's better that it goes inside the baby in the next two hours."

Tackling Sore Nipples because of Breastfeeding.

He advises, "Nipple soreness is basically Cracked Nipples. This is either due to the nipples getting dried and cracking. Or sometimes it happens because there is a little fungal infection around the nipple. A simple solution is to take up the milk and apply it to the nipple. Milk itself has healing properties. If it still doesn't get relieved we have medical preparations called lanolin. So we have lanolin creams, lanolin ointments, which can be applied on the nipple for soreness and it is safe for the baby. Another reason for cracked nipples is a fungal infection of the nipple. Here it is important to examine the oral cavity of the baby for not having any fungal infection inside."

Clearing the doubt, he adds, "Yes, the mother can feed. There is no evidence that breast milk releases the virus. The only way a baby can get covid is due to oral or nasal secretion by the mother. So the mother should wear a mask when she needs to feed the baby. A covid mother can keep the baby in a crib with the recommended distance in between. The mother should wear a mask and sanitize before going near the baby. Many are using nipple shields such that the nipple shield should be sterilized after every use."