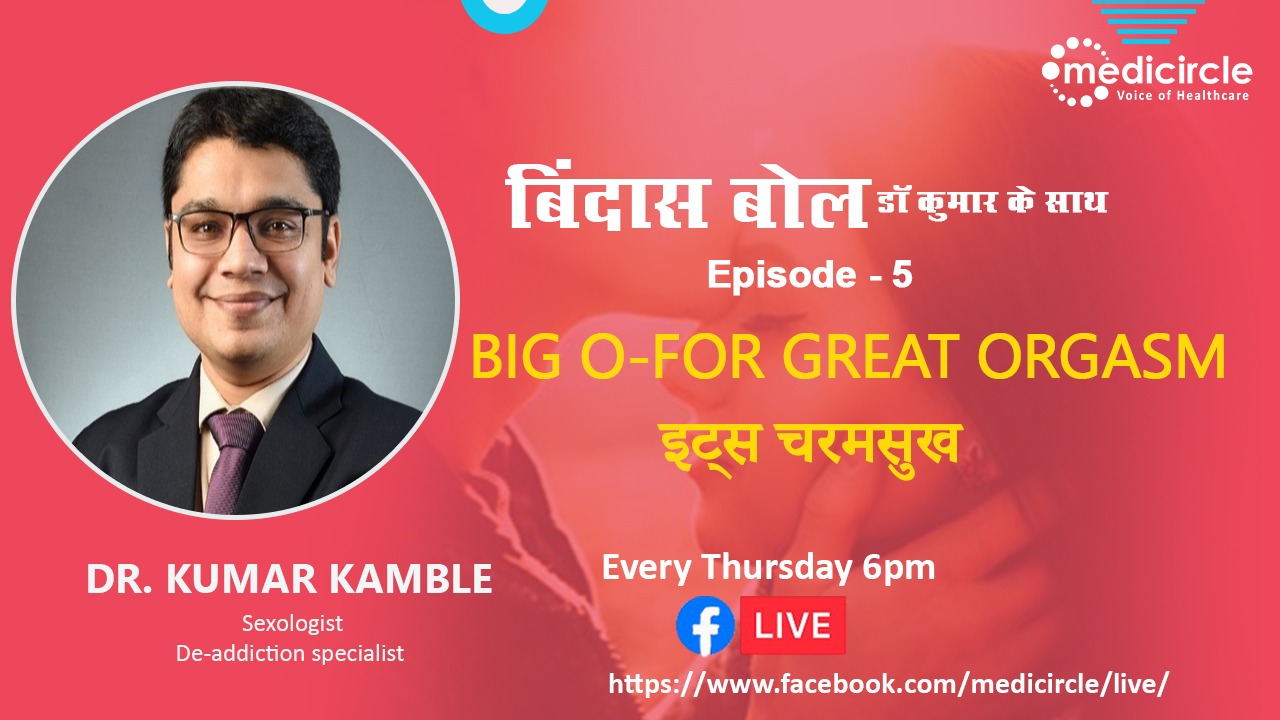 “The journey is more important than the destination to have healthy companionship and sexual life.” Professional advice by Dr.Kumar Kamble must be followed by every couple to build long-term healthy relationships.

Orgasm is very important for a healthy sexual life. It is an element that gives a pleasurable effect to the life of couples. It also helps in building healthy relationships among couples. Sexual life does not just relate to reproduction but also acts as a stress reliever, mood enhancer, and immunity booster. Achieving these benefits is possible only when a couple takes orgasm awareness seriously and experiences it. At Medcircle, we are presenting the Ask The Expert Series on sexual health. The series is titled Bindas Bol with Dr. Kumar Kamble.

Dr.Kumar Kamble is an expert Psychiatrist, De-addiction Specialist, Sexologist, Speaker, Mental and Sexual Health Educator. He is also associated with the Umang Clinic. He has worked with King Edward Memorial Hospital as a Medical Office Coordinator. His main interest lies in advocating correct information on sexual health and spreading awareness about the same.

The science behind Orgasm

Dr.Kumar Kamble informs,” Orgasm is a part of the sexual cycle. A sexual cycle consists of four phases:

The first phase of the sexual cycle is desire. Generally, when a person involved in sexual activity reaches the second phase, there is excitement in the body and mind. During this exciting phase, there are changes in the body like increased blood circulation in the genitals and an increase in bodily secretions. This results in sexual tension with sexual satisfaction which is called orgasm.”

Orgasm is experienced by both males and females

Dr.Kamble says, “Orgasm is part of normal sexual life in both males and females. We generally tend to discuss orgasms only in males. Most of the women are unaware of the orgasm in their life. It is generally considered that sexual intercourse is important from only a reproduction point of view. Due to this preaching and practices, women stay unaware of the orgasm. Because of this unawareness, women do not tend to discuss orgasm. But, yes males and females both indeed have an orgasm.”

Difference between male and females orgasm

Dr.Kamble informs,” There is a difference between males and females which depends on sexual cycle and phase. The orgasm in men is generally observed by releasing sperms whereas in females it is observed as pressure and contractions in the vagina and uterus. This feeling generally gives sexual satisfaction and pleasurable effects in both males and females. When sexual tension reaches a peak point, it gives a pleasurable effect which is called orgasm.”

Dr.Kamble further informs, “The resolution phase is a part of the cycle where there is a pause in the sexual activity. This refractory period after ejaculation will lead to a pause in sexual activity. The time variation is 10 - 30 mins or may last to 2 hours. This increases as age advances. This refractory period is normal for both males and females. In females, there is a long-lasting orgasm phase. The orgasm time may be extended in females which continues allowing no time for refractory or pause phase. It is important to note that the orgasm time in females may continue for a long during the refractory phase.

Dr. Kamble emphasizes, “Awareness about sexual health is very important to maintain a healthy life. Male partners generally have this question cropping up in their minds about orgasm and sexual satisfaction. Knowing about the sexual cycle and refractory period that is considered natural can help them relate to the questions regarding achieving sexual satisfaction in their respective partners.”

Importance and difference between the refractory period in males and females.

Dr.Kamble says, “During sexual activity in males, it is observed that after ejaculation, they step into a refractory phase in which there is a pause during sexual activity. Male partner generally takes time to get excited after ejaculation which is termed as the refractory period. While in females, it is observed that the orgasm continues during the refractory period as well for a long time. This is a natural difference. To bridge the gap between males’ and females’ sexual life, the couple should indulge in more foreplay, increasing the excitement and helping the provider longer phase of orgasm in the females. So every couple must indulge in foreplay for better sexual satisfaction.”

Orgasm should not be given sole prime importance during sexual activity

Awareness about the orgasm is important

Dr.Kamble informs, “The journey is more important than the destination to have healthy companionship and sexual life. Male partners should not be tensed about giving orgasm feeling to females. Importance should be given to orgasm in relation to the awareness about sexual activity.”

Dr. Kamble states, “Spirituality is being focussed and involved in work with honesty. Being good in your deeds and returning goodness is of prime importance. During orgasm, there is a feeling of positivity. Awareness about orgasm should be taken positively by everyone”