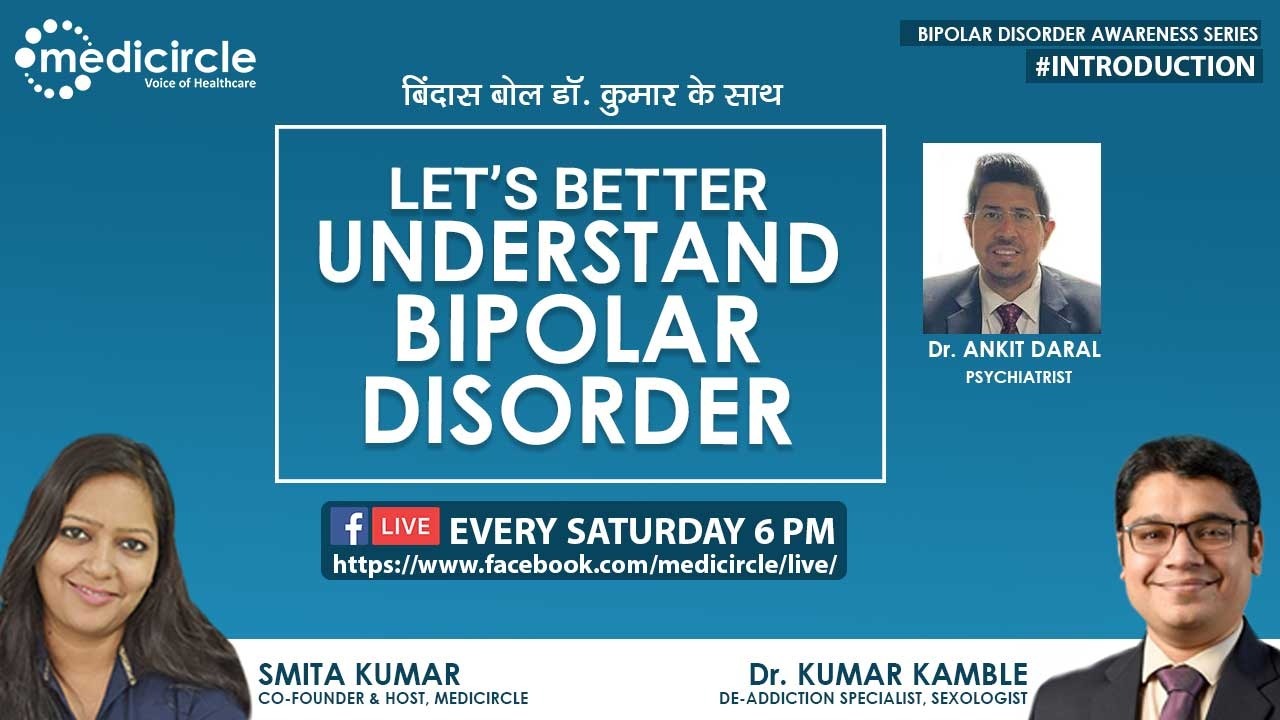 Bipolar disorder is a mood disorder (state of emotions) that causes unusual shifts in mood. The mood episodes are categorized as manic/hypomanic (abnormally happy) or depressive (sad mood). If these symptoms are not treated on time, it may lead to complications like suicide. However, the symptoms can be well controlled with medicines.

Bipolar disorder is a psychiatric illness characterized by unpredictable swings in mood. Bipolar disorder causes changes in mood and behavior that significantly alter life on a day-to-day basis. A person with a parent or sibling with bipolar disorder has a 4 to 6 times higher risk of developing it when compared to someone who doesn't. Loss or damage of brain cells, imbalances in neurotransmitters, mitochondrial disorders are all considered in the pathogenesis of the bipolar disorder.

The major difference between clinical depression and bipolar disorder is the presence of manic or hypomanic (a milder form of mania) episodes. It is important to understand that the presence of a depressive episode is not enough to diagnose bipolar disorder. An array of treatments is available for the management of bipolar disorder, usually involving a combination of psychotherapy, medications, and lifestyle changes. They also include Cognitive behavior therapy, Psychoeducation & Interpersonal, and social rhythm therapy.

The current prevalence in India of bipolar disorder is 6·9% as compared to other psychiatric illnesses.

The annual incidence of bipolar illness is considered generally to be less than 1 percent, but it is difficult to estimate because milder forms of bipolar disorder are often missed.

Bipolar disorder is common, affecting anywhere from 0.5 per 1000 to 21 per 1000 Indians annually, and typically manifests between 20 and 30 years of age.

All about Bipolar disorder

Dr. Kumar explains, “Bipolar disorder is a mood disorder (state of emotions) that causes unusual shifts in mood, energy, activity levels, concentration, and the ability to carry out day-to-day tasks. People with bipolar disorder experience periods of unusually intense emotion, changes in sleep patterns and activity levels, and uncharacteristic behaviors that typically occur during distinct periods of days to weeks, called mood episodes. These mood episodes are categorized as manic/hypomanic (abnormally happy or irritable mood) or depressive (sad mood). People with bipolar disorder can have periods in which they are extremely happy and energized and other periods of feeling very sad, hopeless, and negative. Their emotions and mood don't match with the external situation or circumstances. It can be the opposite of what it should be. In between these periods, they usually feel normal.

According to the National Advisory Mental Health Council, the treatment success rate for bipolar disorder is a remarkable 80%.

Dr. Ankit expresses, “Anyone with bipolar disorder can live a normal life. Patients can take medicines for their manic and depressive phase and lead a normal life, doing all their work on their own.”

Bipolar disorder I – Mania and depression

How it differs from a borderline personality disorder

Dr. Ankit describes, “Borderline personality disorder is characterized by personality traits that fluctuate as mood swings. There can be 4-5 mood swings in a day. On the other hand, bipolar disorder persists for a long period. Mood episodes can last for longer periods, such as several weeks or months. The person remains in the same mood for weeks or months whereas, in borderline personality disorder, the mood fluctuates depending on the other external stimuli too.”

Dr. Ankit says, “If there is a family history of bipolar or mood disorder, then there are 50% chances that child might also contract it. During childhood, it is hard to differentiate between different mood disorders because most of their symptoms overlap. Thus, it becomes important to first differentiate between DD, psychiatric and mood disorders in children. There are several steps in which the child is tested or screened for a mood disorder. Diagnosing children for bipolar disorder has a poor prognosis. Hence it should be avoided until the child is a teenager.”

Helping someone with bipolar disorder

Dr. Kumar adds, “Awareness should be created about the disorder, symptoms, and treatments available. The symptoms can be well controlled with regular medicines. It comes in episodes and lasts for some time. Between the two episodes, the person leads a normal life. It can relapse after a gap. As soon as the person regains the disorder, he or she should take medicines under the supervision of a physician. The patient should seek professional help for its complete treatment. The employer and family members should be well informed about this condition. Bipolar mania and depression can lead to extreme complications that can result in suicide. Therefore, to avoid any such complications, the patient should be treated for the symptoms at the right time.”