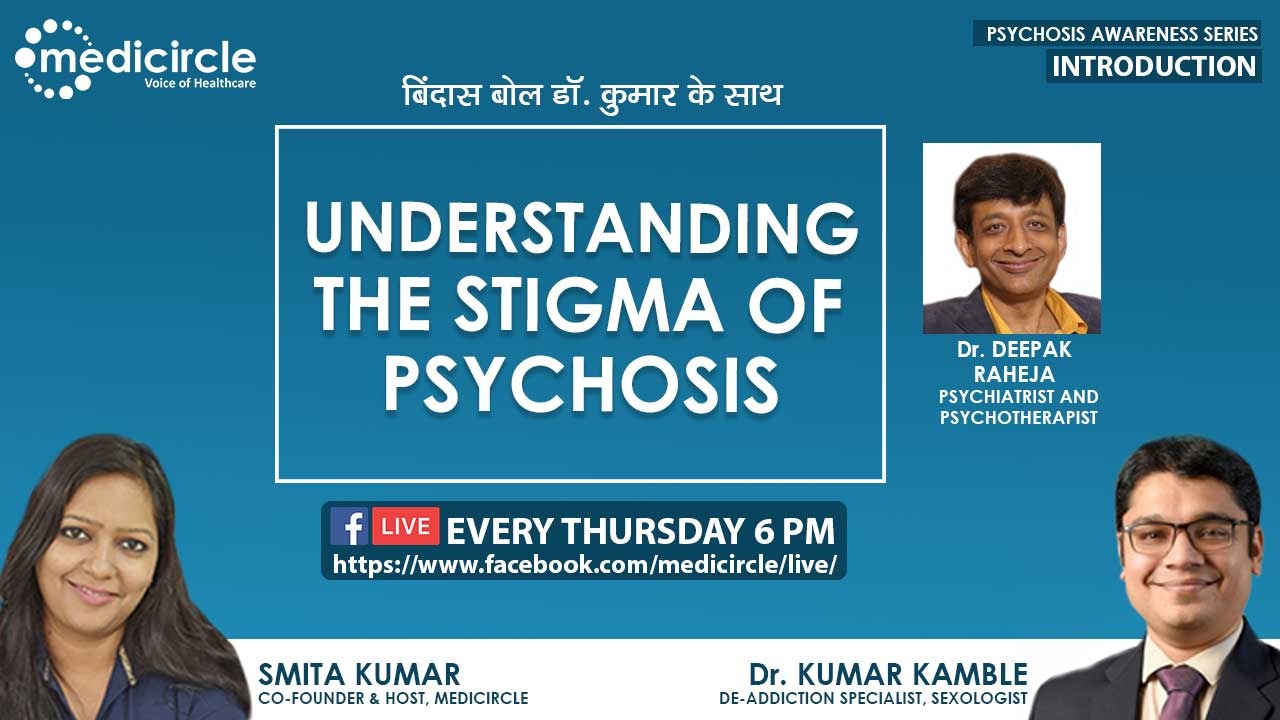 The word "psychosis" is used to describe a group of conditions that affect the mind. The person with psychosis loses contact with reality. Psychotic symptoms are more common in people who have had a brain injury. The exact cause of psychosis is not fully understood. It is important to understand the illness and be aware of early warning signs

Psychosis is a condition that affects the way your brain processes information. It causes you to lose touch with reality. You can see, hear or believe things that are not real. Psychosis is a symptom and not a disease. It can be triggered by a mental illness, a physical injury or illness, substance abuse, or extreme stress or trauma. Psychosis can be a symptom for any mental illness like schizophrenia or bipolar disorder । Few symptoms of psychosis include difficulty concentrating, anxiety, hallucinations, depression, and withdrawal from family and friends. An untreated episode of psychosis can result in structural brain damage due to neurotoxicity. The best outcomes result from immediate treatment, and when not treated psychosis can lead to illness, injuries, legal and financial difficulties, and even death.

Approximately 1 percent of the population suffers from a psychotic disorder as per the research.  According to the National Institute of Mental Health, 3 out of 100 people will experience psychosis at some time in their lives. WHO also estimates that about 7.5 percent of Indians suffer from some mental disorder and predicts that by end of this year roughly 20 percent of India will suffer from mental illnesses. According to the numbers, 56 million Indians suffer from depression and another 38 million Indians suffer from anxiety disorders. More than 69% of people with schizophrenia are not receiving appropriate care. 90%per cent of people with untreated schizophrenia lives in low- and middle-income countries. Lack of access to mental health services is an important issue. Furthermore, people with schizophrenia are less likely to seek care than the general population. Psychosis can be caused by some medications, alcohol, or drug abuse. Three out of 100 people will experience psychosis at some time in their lives. About 100,000 adolescents and young adults have first episode psychosis each year. Studies have shown that people who experience traumatic brain injury are at higher risk of developing headaches, depression, and mental or intellectual disorders up to five years after the event.

Dr. Deepak Raheja is a Senior Psychiatrist & Psychotherapist and has been associated with the field of mental health and wellness for over two decades. Dr.  Raheja currently heads the Departments of Psychiatry at Paras Hospitals, Gurgaon, Sama Nursing Home and Ashlok Hospital in Delhi, and is a senior consultant Psychiatrist to many diplomatic missions. Acknowledging his contributions, the Government of India has given the prestigious Indira Gandhi Priyadarshini Award for his outstanding services, achievements, treatments and contributions in the area of community services in mental health in the year 2007.

Psychosis and its symptoms

Dr. Kumar says, “Psychosis means loss of contact with reality. This further causes delusion and hallucinations. Delusions are unshakable beliefs in something that isn’t true or based on reality. These delusions usually involve mistaken perceptions or experiences. But in reality, the situations are either not true at all or highly exaggerated.”

Dr. Kumar adds, “Hallucination is the experience of perceiving objects or events that do not have an external source. These are sensory experiences that appear real but are created by your mind. They can affect all five of your senses. For example, you might hear a voice that no one else in the room can hear or see an image that isn't real. Psychosis is an important feature or symptom of schizophrenia. Schizophrenia is a mental disorder in which people interpret reality abnormally.”

Dr. Kumar speaks, “Insight refers to the capability of psychiatric patients to recognize and accept that they are suffering from a mental illness. When this insight is absent, it is termed as psychosis and in presence of this is referred to as neurosis.”

Psychotic episodes are of three phases –

Prodrome - Prodrome symptoms vary from person to person and some people may not experience any of the changes. It’s not clear whether to give antipsychotic medicines in this phase or not. Antipsychotic drugs or SGA’s are available. SGA's are very safe medicines for schizophrenia. These are designer medicines that work on multiple neurochemicals. Psychosis is also a symptom of mood disorder, schizophrenia or organic conditions and in some special conditions.

Acute - This is the stage when characteristic psychotic symptoms – such as hallucinations, delusions and very odd or disorganized speech or behaviors – emerge and are most noticeable. In this phase, it is very simple to recognize a patient with psychosis.

Recovery - Within a few weeks or months of starting treatment, most people begin to recover. Many of the symptoms get less intense or disappear, and people are generally better able to cope with daily life. Some of the symptoms that emerged in the Acute Phase may linger in the Recovery Phase, but with appropriate treatments, the vast majority of people successfully recover from their first episode of psychosis.

Dr. Deepak stresses, “Mainstay of treatment during this period is medications. However, counseling, family support and psychotherapy are also essential in treating psychosis.”

Dr. Kumar expresses, “Psychosis can be because of biological, psychological and social reasons.

Biological factors imply genetics. If any of your parents have the problem of psychosis, this elevates the chance of developing psychosis by12%. If both of your patients have psychosis, this increases the chance of contracting by 40%. Psychological factors indicate the use of alcohol or drugs, including stimulants such as methamphetamine and cannabis, People who have an addiction to alcohol or certain drugs can experience psychotic symptoms if they suddenly stop drinking or taking those drugs. Social factors include personal stressors like the death of a family member, partner, failure, breakup or divorce. Someone experiencing these factors will generally recover in a few days to a few weeks, depending on the source of the stress.”

Dr. Deepak illustrates, “Traumatic brain injury can lead towards psychosis. The reason for this is not yet entirely understood. The basal ganglia, limbic area, and hypothalamus act like a related station. In PET scans, it has been found that some areas are hypermetabolic and some are hypometabolic. Abuse of substances is also trauma to the brain which then leads to chemical disturbances. Medication is an effective way of relieving symptoms of psychosis and preventing relapse. It is thought that medication reduces the frequency and severity of symptoms by helping to restore the chemical balance of the brain. Psychological therapy can also be useful to help better manage stress, cope with symptoms and manage relapse. Prognosis is much better if the treatment is treated well in time. It is important to understand the illness and be aware of early warning signs. Please do not ignore the symptoms if seen in any of your loved ones.”

It is essential to follow the treatment plan for psychosis and other mental health conditions to prevent a relapse of symptoms.