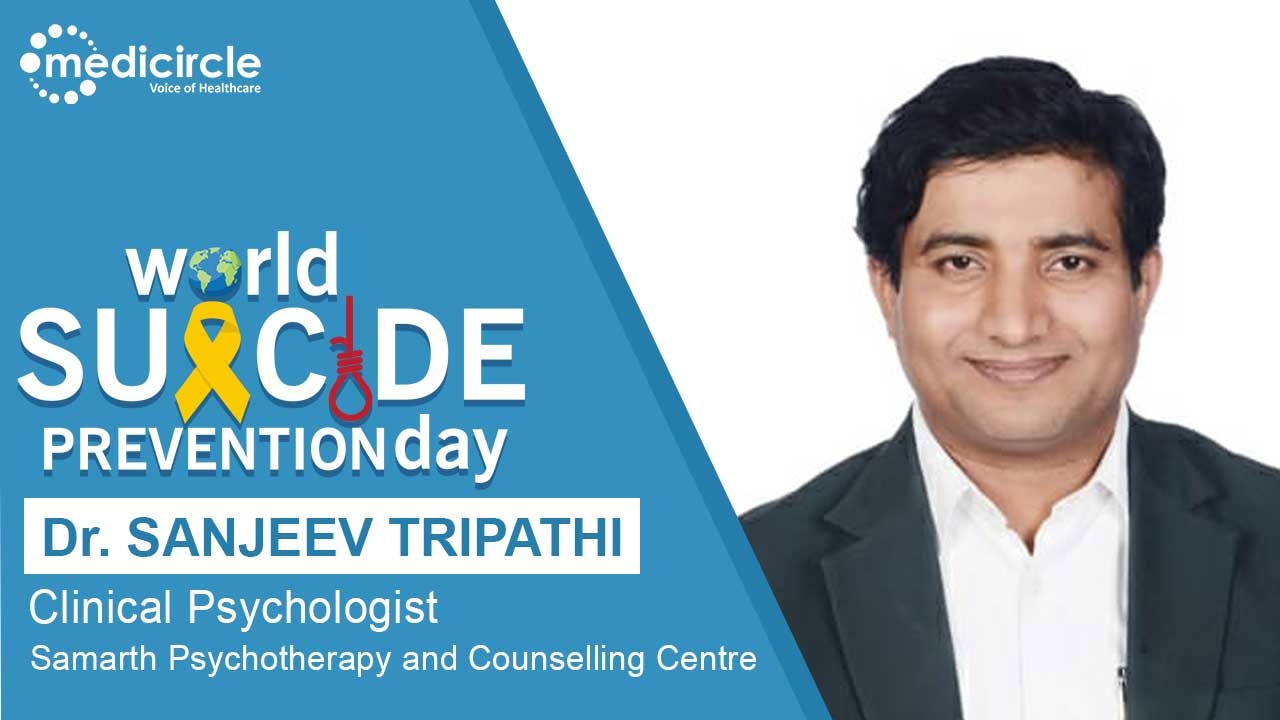 Dr. Sanjeev Tripathi talks about Suicides, their causes, and warning signs. Dr. Sanjeev advises on how to support someone with a mental health issue

We lead busy lifestyles and barely get time to sit and process our thoughts, which is likely a reason why mental health issues or underlying problems go unassessed. The majority of these occur in underdeveloped and developing countries. Undiagnosed and untreated mental illness is the biggest reason behind suicide. Every 40 seconds someone takes their own life according to the World Health Organization (WHO). That’s about 800,000 people worldwide every year - although some estimates put that number closer to 1 million. Suicide is the leading cause of death for people aged 15 to 29 and for every suicide that results in death, there are as many as 40 attempted suicides.  The International Association for Suicide Prevention (IASP) initiated World Suicide Prevention Day in 2003. This Year World Suicide Prevention day is recognized on 10th September 2021. We at Medicircle are conducting the Suicide Prevention Day Awareness Series to understand create awareness about suicidal behaviors and how to effectively treat them.

Dr. Sanjeev expresses, “Most suicidal age group in today's time are students of 14-19 years. Failure is the prime reason for this age group to commit suicide. The second age group that is most suicidal is young adults of 25-30 years. They try to commit suicide because of a bad relationship or career. The third age group is 35-40 years and the reason being instability in their life. When their expectations don’t get fulfilled, it gives rise to depression and insecurity.”

Warning Signs to look for

Dr. Sanjeev emphasizes, “The main reason behind most of the suicides is depression. If we figure out the depression at right time, most of these suicides can be prevented. A person getting suicidal ideation often gets a change in behavior, emotions, and thoughts. The person isolates himself. The person is surrounded by sadness, hopelessness, and helplessness. Suicide never happens suddenly; its process starts long before. If you see any of these signs in your near and dear ones, then take action immediately before it gets too late. It is an alarming situation that needs prompt action.”

Dr. Sanjeev says, “Drug addiction is also one of the reasons for suicide. Individuals find it hard to come out from it and at the same time, it becomes difficult for them to carry this. Many times, they do out of aggression which develops suicidal thoughts. They lose everything in addiction, which results in frustration which in turn aggravates suicidal tendencies.

If there is a family history of suicide, then the risk increases for a person to commit suicide. If a person is under depression and has suicidal tendencies along with a family history, then the possibility manifolds of committing suicide.

Mental illness can also be a reason for suicidal tendencies.

If someone around has committed suicide, this also influences the depressed person to commit suicide to end all his problems.”

Dr. Sanjeev tells, “When a successful celebrity decides to end his life, it becomes difficult to make sense of it. Sushant Singh Rajput's untimely demise has impacted the fragile minds of his followers and fans battling suicidal thoughts and suicide ideation.

Talking about his own experience, Dr. Sanjeev adds, “After SSR’s case, I had 4-5 cases which were of suicidal thoughts due to depression and anxiety. Celebrities are a big influence on the minds of people. Their death has a deeper impact than we can imagine especially if it's of someone relatable. This case has also increased awareness in the common public regarding increasing mental health issues."

Supporting someone with a mental health issue

Dr. Sanjeev advises, “Society has a lot of stigma regarding mental health conditions. People generally don't discuss this with others, they don't open up about their mental health conditions. Only family members and close ones are aware of the problems. Families should not take this lightly. The families need to understand the early symptoms of depression and anxiety. If it is just the beginning, then by giving them a good lifestyle, social support, you can bring them out of things. Communicate with them, let them open up, shower love and support. But if the patient has significant signs of behavior change or emotions, then you should take the professional mental expert help. Consult any Clinical Psychologist, Psychiatrist and move in their guidance.”